Bloomsday's past, a surgeon's mysterious death, costly software glitch and other news 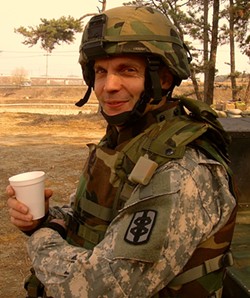 • In honor of its 40th anniversary, an oral history of Bloomsday.

• What the heck is a legislative aid anyway, and just how much power do they have?

• Shhh! He's concentrating. This local artist, who also happens to be autistic, dreams of starting his own animation company. You can buy his work at 4000 Holes and jamesfryeartist.com.

• The wife of the VA surgeon whose body mysteriously turned up in the Spokane River months ago is still searching for answers after police have suspended the investigation.

• Fatal drug overdoses and suicides in Spokane County spiked to levels not seen since 2009. (Spokesman-Review)

• A judge ruled Seattle's trash-check ordinance — which allowed garbage collectors to root through people's trash to make sure scraps of food weren't thrown away — is unconstitutional and void.

• Software glitches are to blame for Community Colleges of Spokane's $8 million budget deficit, Chancellor Christine Johnson says . Some staff and faculty positions will be eliminated this fall as a result. (Spokesman-Review)

• A new study of Louisiana's death penalty shows that four out of five death sentences are reversed, and for every three people the state killed, one was exonerated.

• Police in Baltimore shot a 13-year-old boy brandishing a toy gun as demonstrators remember the year anniversary of Freddie Gray, a man whose death while in police custody set of riots last year. The 13-year-old sustained non-life-threatening injuries. Just days ago, the City of Cleveland agreed to pay $6 million to the family of Tamir Rice, the 12-year-old shot by police while he was carrying a toy gun.

Blink-182 headed to Spokane in September