Maturity or mission creep? The long-running fight over council salaries and council assistants 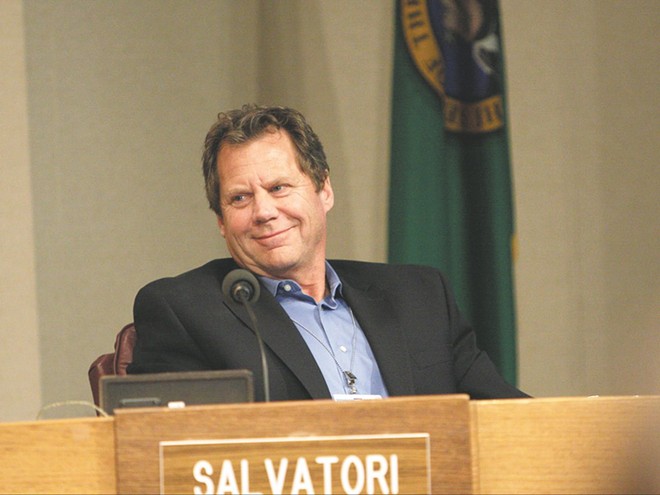 What we didn't get into, however, was how much the debate over council assistants is tied to the current controversy over the 44 percent pay increase for city councilmembers.

Compared with the massive city budget, the raises aren't much: The cost of every city council member raise combined is $84,830 — less than what Monique Cotton was making as the division communications manager for the Parks Department.

But both issues hinge on the debate over the expanding role and cost of the council: A decade ago the council budget was about $666,600. Today, at $1.23 million, it's nearly doubled — and that's before the councilmembers' big raise takes effect in January.

Assistants, the current city council argues, have allowed councilmembers to respond more quickly to constituent concerns, to drive forward important legislation, and to dive deep into the nitty-gritty details of policy. But they've been part of a growing council budget too, and critics worry they've been part of a gradual shift from a council of part-time citizen legislators toward one of full-time career politicians.

So while some see the expanded role of the council — made possible by the assistants — as an example of city government maturing, becoming smarter and more responsive, others see it as a symptom of mission creep and bureaucratic bloat.

Here's an overview of the past decade of debate:

• Every councilmember gets a part-time legislative assistant, each of which is paid $15,000 a year.

Supporters of the proposal to give each councilmember assistants noted that the strong-mayor system, adopted in 2001, had left the city's legislative body scrambling to keep up.

The city already had a part-time research assistant, but most councilmembers felt that digging into the wonky nitty-gritty of legislation took a lot more work than that. And since the strong-mayor system meant the city staff worked for the mayor, not the council, they felt they needed extra help.

Conservative Councilman Brad Stark, who already had a reputation of being a council budget hawk, was the sole vote against it.

“What are we going to do, jack up the salary of councilmembers and add additional staff?" he said.

In the next nine years, that's exactly what happened.

The first Salary Review Commission, established by the city council to remove the awkward political spectacle of councilmembers giving themselves raises, considers whether to increase council salaries for the first time in 17 years.

In her letter to the commission, former Councilwoman Phyllis Holmes cited the recent decision to hire council assistants in her recommendation for keeping council salaries relatively modest.

But the Salary Review Commission turned to the inflation calculator. An $18,000 dollar salary in 1991 — the last time councilmembers had received a raise — was equivalent to a $28,450 salary in 2008.

The council president salary went from $40,000 to $55,000. They recommended adding another "full-time research analyst position to assist in researching items that will be coming before the council."

Conservative Councilwoman Nancy McLaughlin, who pushed for the creation of the commission, said that $30,000 would be difficult to raise a family on. This year, ironically, McLaughlin's 2012 state senate campaign manager was the guy leading the (unsuccessful) bid to find enough signatures to overturn the recent 44 percent wage increase.

Future pay increases, the commission recommended, should be automatically tagged to inflation.

It's a theme that has come up repeatedly ever since in these discussions. "If I were in charge of the world right now, I'd say, boom, set it, and it would be taped to [inflation] for the city of Spokane," Stuckart said this year.

• Despite a serious budget deficit, driven by the recession, city council assistants got a bump from 20 hours a week to 28 hours a week, at $14.37 an hour. Councilman Steve Corker explains that councilmembers are working harder because of the increase in the number of boards and committees the councilmembers are serving on.

Councilman Richard Rush supported the proposal, saying that the city councils without assistants survived “by being considerably less effective.”

Rush would personally benefit from the decision. Two years after he lost his election to Mike Allen, he became Councilwoman Candace Mumm's legislative assistant.

The Salary Review Commission, meanwhile, determines the city council salary should remain the same, citing economic challenges, a comparison with other city council salaries, and the success in attracting candidates to run for city council office. In 2012, the commission came to the same conclusion.

• The Salary Review commission gives councilmembers a 4 percent salary increase, raising councilmembers' pay to $31,200 and the council president's pay to $57,200.

The council rejected a proposal by councilmen Steve Salvatori and Mike Allen to ask the voters if the council should be considered full or part time, with Councilman Jon Snyder saying, "I’m not looking for a full-time salary" and Councilwoman Candace Mumm saying "I don’t have any interest in making this a full-time job." (Both have since changed their minds on the issue.)

Salvatori and Allen objected to the what they say was "mission creep" on the council. "They want to just ooze on to full time, spending hundreds of thousands of dollars, and they're too busy to ask the citizens?" Salvatori objected.

Salvatori had repeatedly refused to hire a council assistant, preferring to donate the money to other projects. One of his choices of projects got him hit with an ethics complaint later that year.

That year, Stuckart also said he "never wanted for anything" on his council president salary, while attacking the mayor's scheduled pay hike.

•The Salary Review Commission gives councilmembers a 44 percent raise, raising their salary to $45,100. City Council President Stuckart got a smaller hike, with his salary rising to $58,630.

Councilmembers filled out a survey with the question, "Have you found that having a full-time Legislative Aide has impacted the number of hours you work?"

Most councilmembers said their assistants had increased what they could get done — their impact and their responsiveness to the citizens — but hadn't reduced how much they work.

If anything, the council said their workload had increased. "A full-time legislative aide has been extremely helpful in my ability to do my job," City Councilwoman Amber Waldref responded in her comments. "However, after six years of City Council, I find that I work more hours now than I did in the past."

Kinnear says she can't imagine how her job would be possible without an assistant. When her assistant is gone on vacation for even a week, it's rough.

"It’s like you say, 'I’m going to take your right arm, and you don’t get to use your right arm for a week.'  Kinnear says. "You become very dependent on that person."

If you want councilmembers to meet community expectations, she says, you've got to give them the time and assistance to make that possible. She says treating council members as full-time employees makes sense for the same reason.

As the controversy over the pay hike has raged, however, some current and former council assistants have waded into the thick of it.

Stuckart's legislative assistant, Adam McDaniel, had referred to the Salary Review Commission as "one of the silliest ways to justify elected official salaries" before it released its recommendation for a major increase. But after local conservatives started complaining about the 44 percent pay hike, he tweeted "Republicans always trip when they see a majority of women getting a raise."

Rush, Mumm's assistant until recently, testified to the commission in favor of the pay hike.
In a column, The Inlander's Paul Dillon, Snyder's former assistant, dismissed the brouhaha as over council salaries as a "manufactured controversy." And former council candidate Michael Cannon, who just filed an ethics complaint about McDaniel, takes issue with the extensively researched testimony supporting a pay increase written by Blaine Stum, Councilman Breean Beggs' assistant. Cannon asks whether Blaine worked on it on city time.

For now, however, any efforts to stop the city council salary increase has struggled to gain ground. Having fallen short of the required signature total to place a referendum on the ballot, pay-increase conservative activist Kelly Lotze asked the city council last Monday if they would be willing to put the referendum challenging their own pay increases on the ballot themselves.

And judging from other cities, the Spokane City Council could still grow quite a bit in the future: Last month, the Seattle City Council just voted to add a fourth staff member for each of its nine city councilmembers. 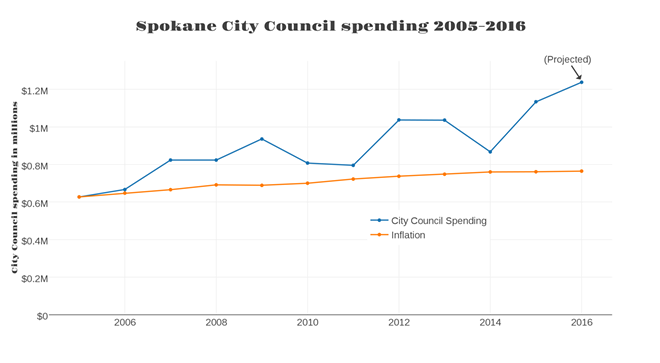 Until 2014, the city council's budget included central services that were shared between different departments. Since 2014, those services starting being tracked separately, resulting in the apparent dip in the 2014 budget.

Bloomsday results book out Tuesday; plus, plan for runners who didn't get a shirt