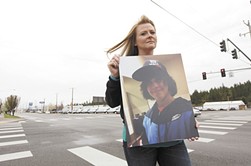 Young Kwak
Carrie Thomson holds a picture of her son at the intersection where he was killed in 2014
For the second year in a row, Carrie Thomson is organizing a fundraiser and helmet safety awareness event in honor of her son, Ryan Holyk.

Holyk was 15 when he died of head injuries in June 2014. He was riding his bike with a friend in Spokane Valley, and at the same time he began crossing the intersection at Sprague and Vista Road, Deputy Joe Bodman's patrol SUV came hurtling toward him at over 70 mph without lights or a siren.

Multiple investigations have concluded that Bodman missed hitting Holyk by about a foot and a half despite the presence of Holyk's DNA on the SUV's front bumper and Bodman's initial statement to dispatch as he came to a halt: "I just hit a pedestrian." Bodman was given a written reprimand. No criminal charges were filed against him.

The second annual fundraiser and helmet safety awareness event, known as Ryan's Ramble, will take place May 14 at Daley's Cheap Shots (6412 E. Trent Ave.). Proceeds from the evening's hot dog fundraiser and silent auction will go toward Marissa's Lids for Kids. The event lasts from 3-6 pm and will feature a cornhole tournament, DJ,  silent auction and T-shirt sale.