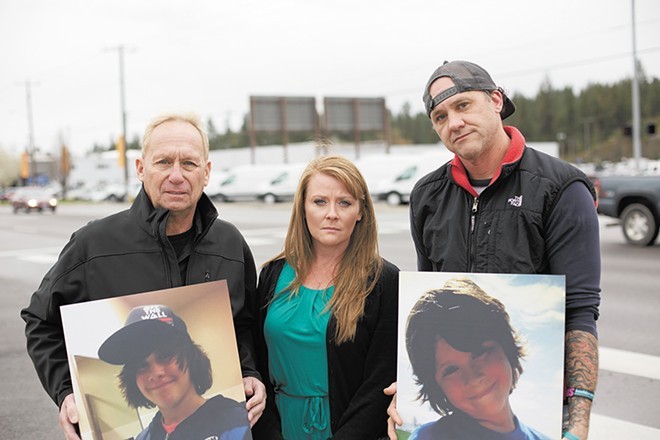 Young Kwak Photo
Ryan Holyk's family at intersection where he was killed
The trial for a wrongful death lawsuit filed against Spokane County by the parents of a 15-year-old Spokane Valley boy who died after he was hit by a speeding police SUV was supposed to begin today.

But less than three weeks ago, lawyers for Spokane County asked the judge to push it back due to a scheduling conflict with another case. The judge agreed despite already continuing the case once before.

"This tragedy has become a political football," says Mike Maurer, the attorney for Holyk's parents.

Here's a bit of background:

Holyk was riding his bike with a friend in May 2014 at the intersection of Sprague Avenue and Vista Road. It was dark, around 10:30 and crossed against a light just as Deputy Joe Bodman accelerated toward him with no lights or a siren. Police reports indicate Bodman was traveling more than 70 miles per hour.

died in the hospital days later from severe head trauma.

Two police investigations, one by the Spokane Police Department and one by the Washington State Patrol, concluded that Bodman missed hitting by about a foot.

Another analysis of grainy surveillance video by forensic video analyst Grant Fredericks drew similar conclusions. Fredericks previously analyzed video footage in the death of janitor Otto Zehm, who died after a violent confrontation with former SPD Officer Karl Thompson. His turned out to be incorrect as well.

SPD's investigation disregarded the fact that Holyk's DNA was found on the SUV's front bumper based in part on Fredericks' conclusion. The WSP investigation specifically stated that "No DNA or fabric was found."

Mitch Ryals Photo
The hat Ryan was wearing the night he died.
A fourth look at the case earlier this year by an independent accident analyst, Jarrod Carter, seemed to contradict police investigations when it found an imprint of Holyk's snapback hat on the vehicle's bumper. Carter's finding prompted Spokane police to reopen the case.

Spokane County Prosecutor Larry Haskell initially declined to file criminal charges against but is currently reconsidering that decision in light of the new evidence.

"We have received [the investigation] from law enforcement and are still looking at it," Haskell wrote in an email. "I cannot comment further at this time."

Bodman was given a letter of reprimand last year for a lights and siren policy violation.