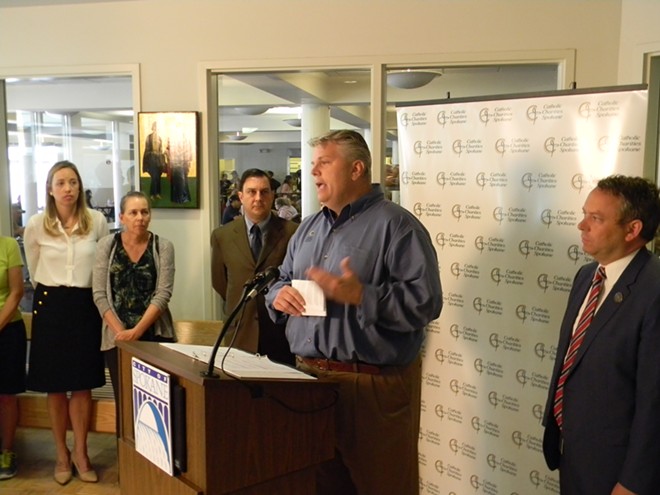 Jake Thomas
Rob McCann (center), Catholic Charities executive director, joined Council President Ben Stuckart (left), Mayor David Condon (right) and others to announce a new effort to keep the House of Charity open 24/7.
The House of Charity, Spokane’s largest drop-in center and shelter for the homeless, will be open 24-7 as soon as next year.

Earlier today, city leaders gathered in the chapel connected to the shelter, which provides meals and connects clients with services, to unveil a partnership that’ll pool together enough resources to keep House of Charity staffed and open around the clock.

In January, Catholic Charities, a large social services nonprofit, cut the hours at the House of Charity and just weeks ago indicated that more cuts would be on the way if it didn’t quickly fill a hole in its budget. Last week, Bishop Thomas Daly of the Spokane Diocese told the Spokesman-Review that if the shelter hadn’t cut its hours Mike Kurtz, a homeless man, likely would have been safe inside and not have been in a confrontation with police that left him dead.

But that could all be changing. The city will be contributing $200,000 from an emergency fund towards the $500,000 needed to keep the shelter open for the rest of the year. Spokane Mayor David Condon and Council President Ben Stuckart announced a partnership that includes the Downtown Spokane Partnership, as well as social service nonprofits Catholic Charities, Family Promise, Salvation Army, Volunteers of America, Transitions and YWCA to address homelessness, specifically the lack of a 24-7 shelter.

“The folks you see in this building today having tater-tot casserole behind me are very fragile, very vulnerable people,” said Catholic Charities Executive Director Rob McCann, speaking at the House of Charity. “They are the ones that we need to care for the most in our community. The House of Charity is that sacred space that does that for them, and we are excited to have an idea and a hope that we can be open 24-7 for all people any time day or night.”

Currently, the House of Charity is open from 7:30 am to noon and serves lunch to anywhere between 200 to 400 people daily. It reopens at 6:30 pm for men looking for a place to stay overnight.

“This is an important next step in a plan to provide 24/7 care for our homeless populations,” said Condon. “New, more permanent housing has opened recently and more is set to come online later this year, but 24-hour shelter space remains a gap.”

City leaders mentioned $13 million in investments in housing and services for homeless people and has embraced the Housing First model. They also mentioned that the city of Spokane is currently seeking to steadily increase human service grant funding up to 1 percent of the city’s budget. All of these efforts, they said, are intended to provide long-term solutions to homelessness. McCann noted, “We don’t want people living in this shelter their entire lives. That’s not dignity; this is supposed to be a temporary, transitory space.”

Stuckart noted that Downtown Spokane Partnership, which represents downtown businesses, has contributed $50,000 to keeping the shelter open 24/7. When asked if the shelter being open would affect downtown businesses, McCann replied, “These are clients that are very fragile; they don’t want to be downtown hanging out at the women’s shoe department at Nordstrom's...they’d rather be here.”

In the meantime, Stuckart said there's still a funding gap. "[W]e are going to need more partners," he said.