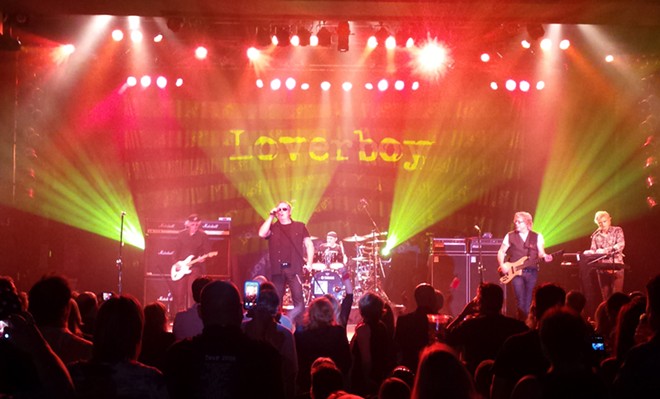 Dan Nailen
Loverboy in Spokane for a sold-out show Saturday night.
Anyone walking in to Loverboy's sold-out show knew what they were getting into. A little nostalgia. Some questionable fashion choices among the fans. A whole heap of pop-rock hits from the '80s.

There was all of that for sure in the packed pavilion of the Northern Quest Resort & Casino Saturday night. What I wasn't expecting, though, were the genuinely dynamic musical chops on display; I certainly didn't put as much consideration as I should have into the nearly 40 years Loverboy has played together.

The hardcore fans — and the place was full of them, pumping their fists, throwing their devil horns in the air, defying security to dance in the aisles — knew all about lead guitarist Paul Dean's scorching guitar runs, and keyboardist Doug Johnson's multi-instrumental prowess as he moved from his synthesizer and piano to also tackle harmonica and saxophone solos. The rhythm section was rock-solid as well, with drummer Matt Frenette playing with both creativity and power, and bass player Ken Sinnaeve doing the same.

Together, they delivered incredibly tight and muscular takes on songs that have glutted classic-rock radio since they first arrived in the early throes of the '80s: "Lucky Ones," "Turn Me Loose" and the like.

Lead singer Mike Reno struggled more than the musicians to replicate the old sounds, but the dude is 61, and powerhouse vocals were never exactly his calling card so much as video-delivered charisma and stage presence. Still an affable and entertaining frontman — he sang the praises of the Okanagan Valley, where he said several of Loverboy's members grew up — his voice was infinitely stronger than many singers on the nostalgia circuit. Having a dozen or so sing-along hits to fill a set certainly helps.

And that's exactly what the Loverboy show was — a cavalcade of hits, one after another, that everyone in attendance seemed to know by heart. From the opening "Notorious" through songs like "Queen of the Broken Hearts," "The Kid is Hot Tonite" and "When It's Over," it was a relentless assault of '80s flashbacks, complete with Reno's customary bandana (you could buy your own at the T-shirt stand).

The band did stretch out some songs a bit more than their familiar versions, particularly "Take Me to the Top," which they entered through a jazzy interlude led by Johnson and later segued into a few bars of the Doors' "Riders on the Storm." The night featured only one ballad, "This Could Be the Night," instead leaning on the harder rock like encore tune "Lovin' Every Minute of It" that made the band early tour partners of KISS and Journey.

The biggest reaction of the night? Duh, totally "Working for the Weekend," introduced with that distinctive cowbell and closing down the band's main set. The room went nuts, of course, for arguably the band's biggest hit. (I still always think of this as the song's greatest performance).

Given that we're looking at an upcoming concert season featuring other '80s-centric acts like Tears for Fears, Violent Femmes, Culture Club and Duran Duran, Loverboy served as a nice appetizer for a summer-long nostalgia trip.