ON INLANDER.COM
Manhunt underway
The Pend Oreille County Sheriff's Office is searching for two suspects who fired shots at law enforcement last night during a pursuit that crossed state lines into Idaho. The sheriff's office is asking residents south of Newport to keep their doors locked due to "armed and dangerous" suspects. (KHQ) 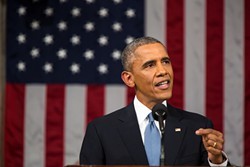 President Obama will visit Hiroshima, Japan, but will not apologize for the U.S. dropping an atomic bomb on the city

Woman charged with hate crime for attacking gay roommate
A Spokane Valley woman allegedly attacked her roommate after the roommate asked her to be quiet because she was making noise all night. She allegedly punched him in the face and called him a homophobic slur, so she was arrested and charged with a hate crime. (Spokesman-Review)

Sorry, not sorry
President Obama will become the first sitting American president to visit Hiroshima, Japan, that place destroyed by a U.S. atomic bomb in World War II. Obama will meet with the Japanese prime minister and "highlight his continued commitment to pursuing the peace and security of a world without nuclear weapons," said White House spokesman Josh Earnest. But the White House made clear that Obama would NOT apologize for the bombing. (AP)

Exception to the rule
Donald Trump doesn't want to bar all Muslims from entering the United States. For Trump, the new mayor of London qualifies as an exception, he told the New York Times on Monday. The London mayor, Sadiq Khan, then criticized Trump in an interview with Time magazine.

Return of the MVP
ESPN reports Golden State Warriors star Stephen Curry has won the NBA MVP award his second in a row, and he proved why last night. After missing weeks of playoff action with a knee injury, Curry scored an NBA record 17 points in the five-minute overtime period as the Warriors defeated the Portland Trail Blazers in game 4 of the second round.