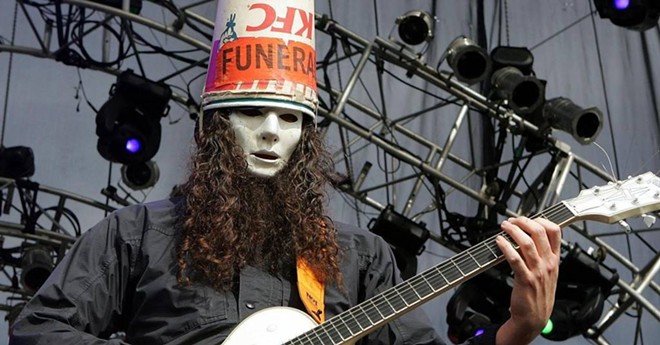 Guitarist Buckethead headlines The Bing July 11.
If you weren't paying attention, you might have missed one of the more bizarre concert announcements to come along in Spokane in a bit.

No, I'm not talking about Florida Georgia Line, the huge country duo who announced a trip to Spokane on Nov. 10. That was one of the Spokane Arena's "bucket list" bands folks wanted to see, and well, you got 'em. Tickets go on sale Friday at 10 am for $34.75/$54.75/$69.75. Get tickets fast, I reckon that show is pretty much a guaranteed sell-out.

Lost in that news, though, might have been the show announcement for avant-garde guitar god Buckethead, who by all appearances on his website, loves Lebron James as much as he loves shredding.

For the unfamiliar, Buckethead is one masterful guitarist who has recorded more than 250 albums, was a member of Guns 'n' Roses for a few years, and yes, wears a Kentucky Fried Chicken bucket on his head, as well as a mask that might remind you of certain horror movie characters.

Here's a clip of Buckethead doing his thing:

Buckethead is playing The Bing on July 11, and tickets are on sale Friday at 10 am for $25.

Idaho primaries, mistrial for Spokane police sergeant and other news