Idaho primaries, mistrial for Spokane police sergeant and other news 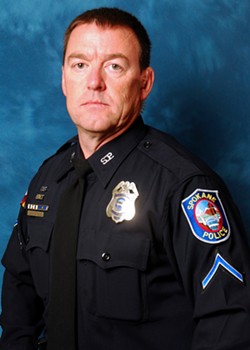 Sgt. John Gately was charged with obstructing the investigation into another SPD sergeant's rape of a female officer.
ON INLANDER.COM

• Yes, Florida Georgia Line is coming to Spokane in November, but one announcement you might've missed: Buckethead. The former Guns 'n' Roses guitarist (briefly) who wears a KFC bucket... well you know where. He'll be at the Bing in July.

• And in light of Idaho's primaries last night: The Measure of Malek (that's Idaho Rep. Luke Malek), who won the primary election and will face Democrat Patrick Mitchell in the November general election.

• A Twin Falls attorney and a Republican legislator face off for a seat on the Idaho State Supreme Court. (Idaho Statesman)

• In the presidential election: Bernie won in Oregon and Hillary leads by less than a point in Kentucky. The Democratic candidates will likely split the delegates.

• The trial for the SPD sergeant accused of tipping off a fellow officer about a search warrant in the midst of a rape investigation ended in a hung jury. Superior Court Judge John Cooney declared a mistrial yesterday. It's now up to the prosecutor to retry Sgt. John Gately on the misdemeanor obstructing charge. (Spokesman-Review)

• Evolving science and suspect police and prosecution practices have dulled the once full-proof reputation of DNA evidence. Now, some experts are questioning its use.

• A second person in as many months died on the railroad tracks in downtown Spokane. (We wrote about a man who survived a run in with a train last year.)

• Millions more Americans are now eligible for overtime pay after a new regulation issued by the Labor Department. Most salaried workers who make up to $47,476 now must receive time-and-a-half overtime pay if they work more than 40 hours a week. The previous cutoff was $23,660.

InHealth: Should you be scared of spuds?