The Measure of Malek

Can Republicans like Rep. Luke Malek cross the Idaho Freedom Foundation and survive? 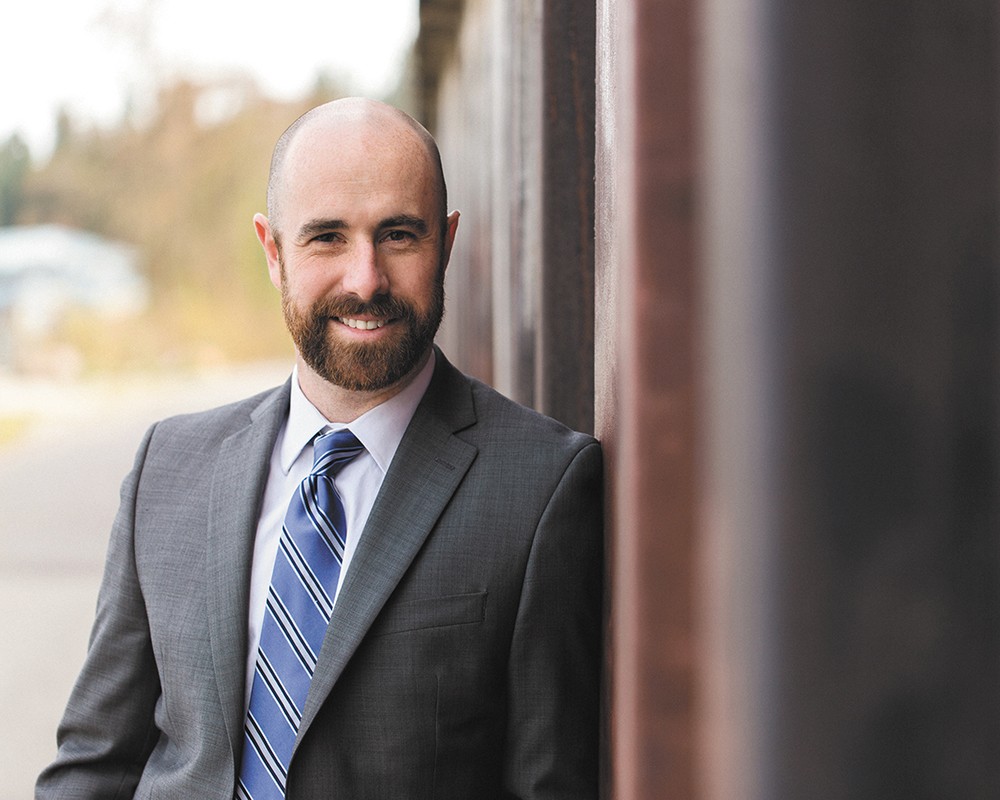 Coeur d’Alene’s state Rep. Luke Malek is proud of his fights for mental health crisis centers and education funding — though its won him criticism from groups like the Idaho Freedom Foundation.

To Idaho Rep. Luke Malek — and the National Rifle Association

and the American Conservative Union — there's no question that he's a conservative.

After all, the NRA graded him with an A and endorsed Malek. The ACU, meanwhile, gave Malek a 91 percent ranking, landing him an "Award for Conservative Excellence."

"I was ranked one point away from being the most conservative member of the legislature [by] the foremost authority of conservatism as an institution in America," Malek says. "They put on freakin' CPAC, the gala for conservatives in the United States."

But as conservative report cards go, there's one where Malek doesn't fare nearly as well. The Idaho Freedom Foundation's "Freedom Index" brands Malek with an "F+"

At one time or another during Malek's two terms in office, Idaho Freedom Foundation President Wayne Hoffman has condemned Malek as a "liberal," a "poster boy of obedience to federal government," and as someone who's vowed "to do anything and everything to expand the welfare state."

Malek has plenty of company. Last year, the Freedom Foundation gave 75 of Idaho's 105 legislators Ds or Fs for the 2016 legislative session.

"I mean," Malek says. He pauses for a moment. "It's a joke. Wayne's whole job is to dupe donors into believing there are problems where there aren't problems. That's how he puts food on his table."

Yet in a state where the Republican primary is effectively the only contest that matters, and where turnout has been so low that a couple of hundred passionate ideologues can swing an election, it's not something that Malek can dismiss; he came within 180 votes of losing to his Republican primary opponent two years ago.

"Ironically, this group that has named itself 'Freedom' holds policymakers hostage," Malek wrote in an op-ed last year. "For some, fear of voting against a ranking from the Freedom Foundation is crippling."

"The Idaho Freedom Foundation has just one client," Hoffman wrote in a recent op-ed. "Freedom."

Plenty of the foundation's critics have raised their eyebrows at its tax-exempt 501(c)(3) nonprofit designation. The Idaho Freedom Foundation has had to dance on a narrow edge to avoid running afoul of IRS regulations. It's legally limited in how much it can officially spend on lobbying. It can produce legislative scorecards like the "freedom index," but only if it sends them exclusively to its subscribers.

It's not allowed to officially "endorse" candidates — hence the fine-print disclaimer below the flurry of Fs, explaining that the scorecard wasn't an "express or an implied endorsement" and that the "foundation recognizes that there are inherent limitations in judging the qualifications of any legislator on the basis of a selected number of votes."

Hoffman is dismissive of the value of other scorecards, like that of the American Conservative Union, noting that they only rate a handful of bills. The Freedom Foundation doesn't rate everything — it doesn't scrutinize appropriations bills, for example — but it dives into dozens of the detailed bills others would ignore, on issues ranging from college trustees to powdered alcohol to international treaties concerning child support.

Sometimes a seemingly minor change to a bill can cause the Freedom Foundation to reject legislation: It turned on a bill it had initially supported — exempting Boy and Girl Scouts organizations from taxes on their candy sales — because not all scouting organizations were covered.

Three-quarters of the Idaho legislature is Republican. But Hoffman gives them no quarter.

DISSECTION OF A REPUBLICAN

In deep-red North Idaho, Malek has a reputation for being comparatively moderate. Yet the precise shade of his Republican ideology is trickier to nail down.

A former Kootenai County deputy prosecutor, he's called the effort to legalize medical marijuana "a predatory campaign by the drug cartels." But at other times, he can be downright libertarian: Malek's law firm sued the federal government in 2014 over its bulk data collection practices.

Malek says he's been vindicated: The mental health crisis center in Coeur d'Alene, after only a few months in existence, has saved local hospitals $400,000 in health care costs alone.

He also has clashed with the Freedom Foundation over licensure requirements, like those for foreign-language translators. Explaining why he supported the requirement, Malek pulls up a century-old photo of an Idaho man who spent years in jail for a crime he didn't commit because his not-guilty plea was incorrectly translated as a confession.

"If you start going through their quote-unquote 'analyses,' they don't do any research into how these bills affect Idahoans," Malek says.

The biggest point of conflict between Malek and Hoffman is an issue that has largely been consigned to the rearview mirror in the current presidential election: Obamacare.

Idaho had two choices when it came to federal health-reform law: Build and run its own health care exchange, marketplaces selling subsidized insurance, or let the federal government provide the exchanges instead. From Malek's point of view, Idaho running its own health care exchange seemed like the more conservative option — putting more power in the hands of the state instead of the federal government.

Here, too, Malek feels that the results have proven him correct. The administrative fees leveled on Idaho's users of the exchange are only a third of the federal fees. By the end of last year, Malek reports, it had saved Idaho residents more than $10 million.

But to Hoffman, this was surrender. "We shouldn't try to figure out how to make socialism a good useful thing," Hoffman says.

That's been a key avenue of attack for Art Macomber, the local real estate attorney running against Malek in the May 17 primary. Macomber can't point to other states that are doing it better, but he believes that Idaho's choice to build a health-insurance exchange has been a distraction from seeking "market solutions."

And where many state politicians lobby for federal funding, Macomber has joined a right-wing chorus calling for Idaho to wean itself off of support from the federal government. "In the long term, Idaho has to be independent and stand on its own two feet," he says.

While Malek's not a fan of how the federal government spends its money, he doesn't believe the money is inherently tainted. He doesn't think Medicaid is an efficient program, but that hasn't stopped him from seeking alternative state solutions to cover uninsured Idahoans.

"The fact that we didn't cover those 80,000 people at the end of the session this year was a catastrophic mistake," Malek says.

"At the end of the year, legislators are scored to show how obedient they have been," Malek wrote in the op-ed last year. "This obedience flies in the face of the independence that Idahoans are known for, but the threats work."

This year, other Idaho Republican legislators have joined Malek in this sort of condemnation. Rep. Kelley Packer of McCammon slammed the Freedom Foundation on her podcast, while Sen. Jeff Siddoway of Terreton wrote in a letter to the editor that the handful of legislators with A's on the Freedom Index "are really the ones that need to be replaced."

"The so-called Idaho Freedom Foundation was discredited many years ago as a special interest organization with a devious agenda," Sandpoint Sen. Shawn Keough wrote on her campaign website.

The Freedom Foundation made her remarks into a fundraising page.

Keough knows that these sorts of attacks matter. The ACU gave her an 83 percent rating last year, but the Freedom Index gave her an "F-" In her past two races, she says she's seen her margins of victory decrease.

Yet at a national level, the Republican trend appears to be veering away from the no-compromise focus on ideological purity that defined the Tea Party era.

This year's Republican presidential frontrunner, after all, is Donald Trump, stuffed to the brim with conservative heresies, bragging about his willingness to "make a deal." But Idaho may be an exception; this was a state where uncompromisingly conservative Texas Sen. Ted Cruz beat Trump handily.

Idaho, perhaps, is the place where the purity test still lives. ♦