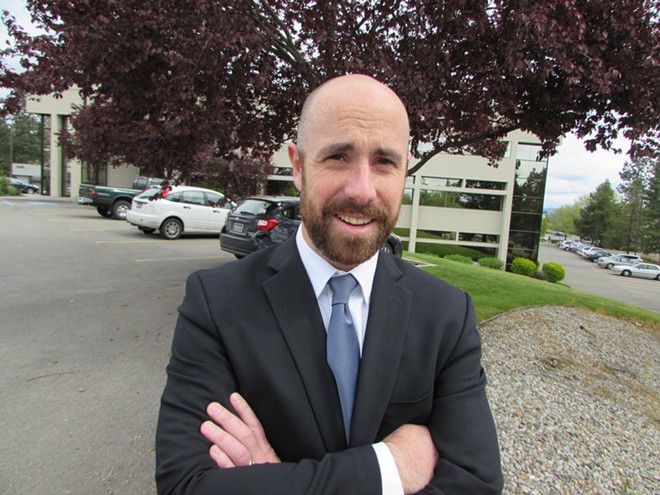 The answer is a resounding "Hell yes."

"For some, fear of voting against a ranking from the Freedom Foundation is crippling," Malek wrote in a Spokesman-Review op-ed last year. He got called a "poster boy of obedience to federal government" as a result.

In fact, not only did the Freedom Foundation's enemies in North Idaho — like Sen. Shawn Keough and Malek — easily survive, the group lost some of their most reliable allies.

It's a clear example that legislators, even in famously conservative North Idaho, don't have to be afraid of a bad score. Support from the Idaho Freedom Foundation appeared to be just as dangerous to incumbents this time as it is an asset.

This time, of the top 10 scoring legislators on the Idaho Freedom Index, three were defeated in the primary.

• Rep. Sheryl Nuxoll, (IFF score: 90.2) who made headlines last year for condemning the choice to open an Idaho session with a Hindu prayer: "Hindu is a false faith with false gods," she said. She made headlines again in in Wonkette today, which noted her history of statements comparing, say, insurance companies participating in Obamacare to the Holocaust. She lost to Grangeville rancher Carl Crabtree by 123 votes.

• Coeur d'Alene Rep. Kathy Sims (IFF score: 89.4), who opposed the bill supporting the creation of a mental health crisis center. So did the Idaho Freedom Foundation. She was narrowly beaten by college administrator Paul Amador.

Of the top 10 facing primary challengers, only Ron Nate of Rexburg survived — and oh-so-narrowly, winning by a mere 167 votes.

Expand the list to the top 20, and you have a few more IFF-favored incumbent victories — including Sen. Lori Den Hartog, Rep. Vito Barbieri, and (barely) Rep. Don Cheatham. But you also have another incumbent get toppled who scored better than the vast majority of the Idaho legislators on the Freedom Index: Rape-comment-maker Rep. Pete Nielsen.

And in North Idaho, the IFF-favored challengers came up empty-handed.

This is the first year of the IFF's 501c4 sister-organization, Idaho Freedom Action, which is allowed to endorse or oppose more explicitly than a tax-exempt 501c3 non-profit would . Idaho Freedom Action targeted Keough and Malek in particular. In previous years, Keough has said, right-wing challengers have eaten into her margins of victory.

Not this time. Despite being a constant target for the Freedom Foundation's criticism (and an F- Freedom Index grade), Keough won by over 11 percentage points. And Sen. Bob Nonini, one of the highest-ranking Republicans on the Freedom Index, endorsed Keough instead of her ostensibly more conservative opponent.

Malek (with Freedom Index grade)—came within 180 votes of losing to his Republican primary opponent two years ago. He won by far more votes this time, with a whopping 16 percentage point margin of victory.

"The fact is I feel really good about what happened last night," Hoffman says. "I think people are being a little bit ridiculous to think that somehow we’re going to walk out with no conservatives losing and no liberals winning. There's never been an election where it was a sweep for one faction or another."

He prefers to look at the 10 races that Idaho Freedom Action targeted — which didn't include McMillan or Nuxoll's race in the sprawling 7th district.

"We didn’t even engage in those races," Hoffman says. "We lost? Give me a break, that’s nutty."

"We have never said your Freedom Index score was going to be somehow a badge of invincibility," Hoffman says.

There are a lot of reasons, he suggests, that a local race can be won or lost. Not just a single ranking.

"To me the big thing is there were races where people said it was impossible to win, and [we] won," Hoffman says.  "We were successful in educating voters. Win, lose or draw I think the voters were more knowledgeable than they ever were before."

A few weeks ago, Hoffman ascribed the Trump phenomenon to anger at how the Republican establishment had broken promises and betrayed their constituents.

But the results from this primary election calls that analysis into question: In Idaho, as with the Republican primaries nationwide, the voters haven't chosen to punish that many "establishment" incumbent politicians, whether at local or national levels.

That's not to say that trend won't change two years from now. The tetherball of democracy has a habit of swinging back around and whacking those on the head who think they've changed the political landscape permanently.

Remember, it was not so long ago that a Democrat — albeit a pickup-truck-owning one — won held Raul Labrador's western Idaho seat.