A court case that could have had a devastating effect on public sector unions in Washington and nationally is dead — for now. 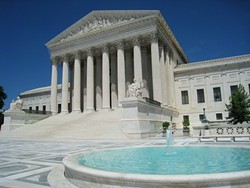 Earlier this week, the U.S. Supreme Court declined to rehear Friedrichs v. California Teachers Association. The case centered on Rebecca Friedrichs, a California teacher who objected to a state law requiring her to pay union fees for representation against her will.

Washington has a similar law compelling public sector employees to pay into a union for representation. Organized labor has anxiously watched the case, which had the potential to diminish the financial viability and political power of public sector unions.

The Freedom Foundation, a conservative think tank, has used a more limited court ruling, Harris v. Quinn, to chip away at SEIU affiliates in Washington.

“At this point, it looks like the Friedrichs case is finished,” writes Maxford Nelsen, director of labor policy for the Freedom Foundation. “With that said, the issue of forcing public employees to fund labor unions against their will is still very much alive both at the state policy level and in court.”

In March, the U.S. Supreme Court tied 4-4 on Friedrichs, allowing a lower court’s ruling in favor of the union to stand. In February, Justice Antonin Scalia suddenly died and there’s been a vacancy on the court since.

Nelson notes that similar cases have been filed around the country and the issue will likely come up again.

“It is quite likely more such cases will continue to be filed until a ninth justice is confirmed and the constitutionality of compulsory agency fees for public employees can be settled more definitively,” he writes. “It will just take longer than expected to come to a resolution.”

Concealed carry, transgender soldiers and other headlines as you end your week