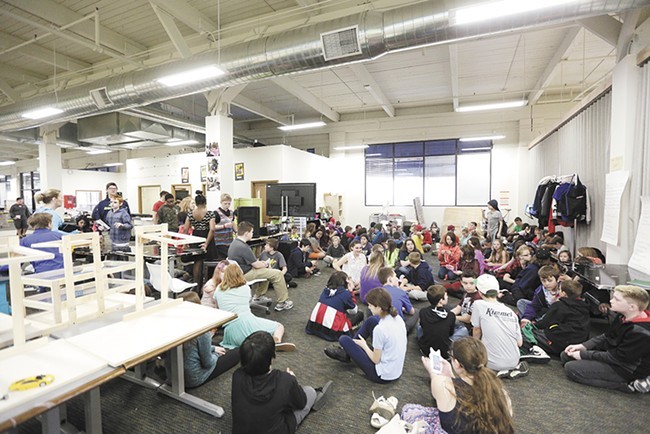 Young Kwak
Students at PRIDE Prep, one of two charter schools in Spokane
When the state legislature passed a law earlier this year that effectively ensured charter schools could stay open, charter school proponents knew the fight was not over yet.

"The reality is your efforts are not finished. We're going to continue to need your help," state Sen. Michael Baumgartner said in April.

Baumgartner was speaking to students and teachers from PRIDE Prep and Spokane International Academy — Spokane's two charter schools — at a celebration of the law to save their schools. He knew the fight wasn't over because the state's largest teachers union — the Washington Education Association — promised to challenge the constitutionality of the law days after the law was passed.

Today, they fulfilled that promise.

The WEA — along with a coalition of parents, educators and civic groups — has announced it has filed a complaint in King County Superior Court arguing that the legislative fix that funds charter schools is unconstitutional.

The law passed by the Legislature this year shifted state funding for charter schools from the general fund to the state lottery account. It was supposed to address what the state Supreme Court ruled last year was unconstitutional — the public funding of schools without publicly-elected school boards.

But the lawsuit argues that the shift in funding does nothing to address the unconstitutionality of charter schools. It argues that under the law, "charter schools continue to be run by and responsible to non-profit companies and non-elected boards and, thus, are not accountable to taxpayers who provide funding for charter schools."

It states that charter schools interfere with the state's progress in fully-funding education, as mandated by the state Supreme Court's 2012 McCleary decision. It argues that the "constitutional defects" of the initiative passed by voters that allowed charter schools in Washington "cannot be overcome by this type of shell game." (Click here for the entire complaint.)

"Instead of passing unconstitutional charter school laws, we believe the Legislature should focus on its paramount duty — fully funding K-12 basic education for all of our state's 1.1 million students, no matter where they live," said Kim Mead, president of the WEA, in a statement.

Charter schools survived last school year in part because of wealthy pro-charter school donors, and in part because many — including the two schools in Spokane — joined the Mary Walker School District as "Alternative Learning Environments." The complaint challenges the legality of that move as well.

The lead attorney representing the coalition in the complaint is Paul Lawrence, the same attorney who led the successful challenge to the state's original charter school law.

The Washington State Charter Schools Association plans to file a motion to intervene in the case. It released a statement in response to the suit condemning it as "nothing more than an intimidation tactic designed to preserve a broken status quo and scare our teachers, families and students."

"We are confident that the bipartisan law passed by the Legislature meets the constitutional threshold laid out by the courts," the statement read.

Condon is ready to move on from the Straub report, but the community is not so sure (and other morning headlines)