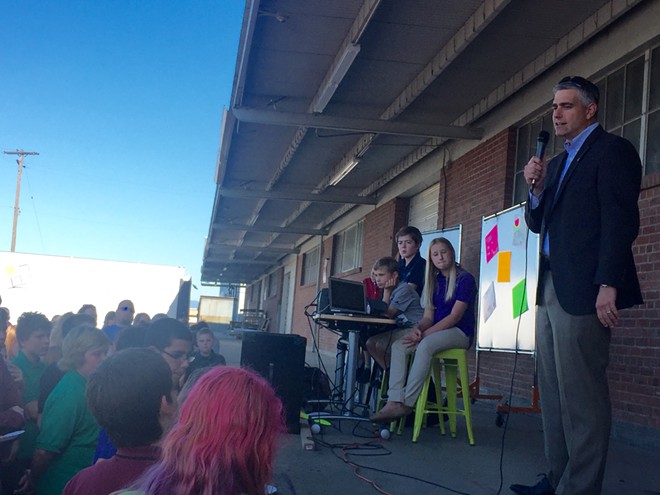 Wilson Criscione
State Sen. Michael Baumgartner explains to a group of students that Washington's teachers unions are preparing another lawsuit.
PRIDE Prep and Spokane International Academy — Spokane's two charter schools — held a celebration Monday night for the new law passed by state lawmakers earlier this month that made charter schools legal again. Yet even as the kids celebrated, state Sen. Michael Baumgartner gave them a realistic preview of the fight ahead to keep their schools open.

"The reality is your efforts are not finished," he said. "We're going to continue to need your help."

was finished for the day at PRIDE Prep, it was 80 degrees out and the kids all had plenty of pizza to stuff in their mouths. Baumgartner, R-Spokane, state Rep. Bob McCaslin and Chris Cargill from the Washington Policy Center all showed up and gave short speeches.

Cargill took the microphone first and praised the bipartisan bill, which shifted state funding for charter schools from the general fund to the state lottery account, addressing part of what the state supreme court ruled as unconstitutional last year. Cargill said charter schools are here to stay.  Then Baumgartner took the mic. 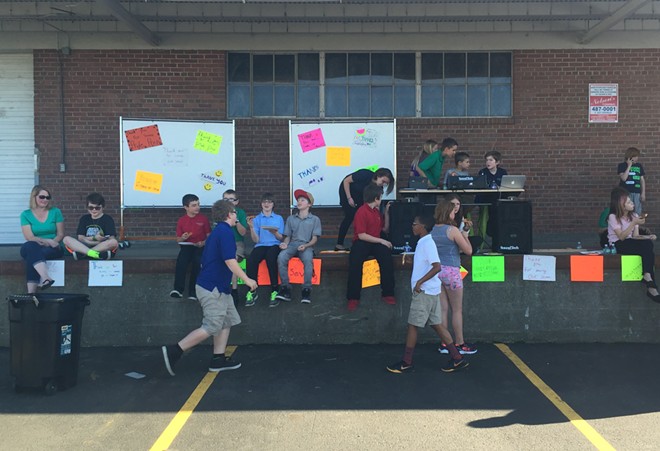 Wilson Criscione
A group of charter school students eats pizza.
The state's largest teachers union — the Washington Education Association — announced a week after the passing of the bill that it would join a lawsuit challenging the constitutionality of the law. Baumgartner, in his short speech Monday, tried to explain to the middle school students that the teachers unions in the state "don't like anything that encroaches or impedes on their ability to dictate what happens in Olympia."

"Right now the state's teacher union is preparing yet another lawsuit before the Supreme Court to go and argue what we just passed, and allowed charter schools to stay open, is again unconstitutional," Baumgartner said, as the kids chewed their pizza. "So there will be another lawsuit."

McCaslin then spoke, bringing up his time as a kindergarten teacher and pointing out that he deals with "some of the same behaviors" in the legislature as he did as a teacher. He then addressed the kids.

"Who's gonna carry on and who's gonna make a big difference in this world? It's you guys," he said.

Travis Franklin, who founded Spokane International Academy, and Brenda McDonald, who founded PRIDE Prep, then thanked the state representatives, and students who helped push for charter schools to be saved.

Teachers unions argue that there is still no publicly-elected board overseeing charter schools, therefore they should not receive taxpayer money, especially when the state's public education system has been ruled criminally underfunded. Wherever the state funding comes from, that argument is not likely to change. And the number of students in public education far outnumber the roughly 1,100 students in the state's charter schools. 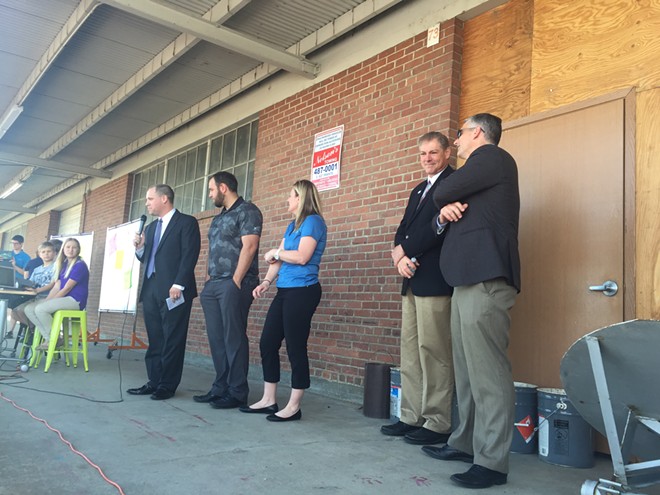 Wilson Criscione
Left to right: Chris Cargill of Washington Policy Center, Travis Franklin of Spokane International Academy, Brenda McDonald of PRIDE Prep, Rep. Bob McCaslin and Sen. Michael Baumgartner
Maggie Meyers, a spokeswoman for the Washington State Charter Schools Association, says she believes charters are on firmer ground legally than they were before the law was passed earlier this month because of the funding shift. But Baumgartner, speaking after his speech, admitted that it's a "distinction without a difference," and that it comes down to more fundamental beliefs.

He said charter schools would "absolutely not" have been saved if it weren't for the testimony in Olympia from charter school students and parents.

"Charter schools are serving so many kids from disadvantaged backgrounds and so many students of color," Baumgartner said. "I think that particularly was a strong voice."

McDonald said none of the politics will affect the students too much.

"I think this is just the future of charter schools in Washington," she said. "I think we're constantly going to have opposition."