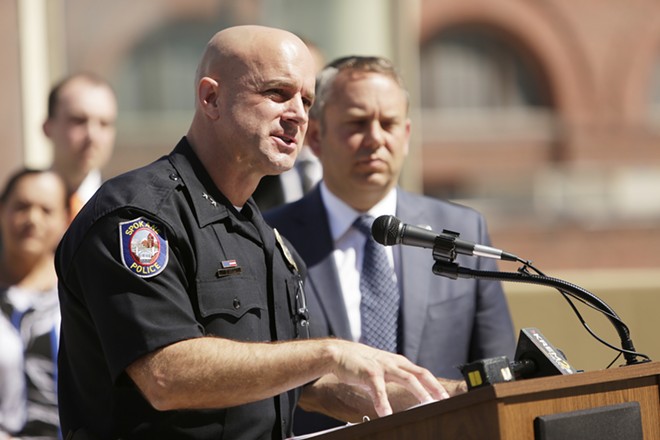 The City Council is scheduled to vote to approve or reject Craig Meidl as Spokane's next chief of police.

In interviews leading up to tonight's vote, City Council President Ben Stuckart says he intends to vote against Meidl's approval.

"I'd be doing a great disservice to all the citizens involved ... if I discounted all their work," Stuckart says. "Two of the [Police Leadership Advisory Committee] recommendations are very specific to involving the public from the beginning."

Two weeks ago, Councilwoman Karen Stratton indicated to the Inlander that she hadn't yet been convinced to vote in favor of Meidl's confirmation. Councilman Mike Fagan has come out in support of Meidl.

Councilman Breean Beggs did not say whether he's decided either way, though he articulated potential compromises — such as appointing Meidl for a "test period" and allow for more vetting.

Councilmembers Amber Waldref and Candace Mumm have not publicly stated which way they're leaning. Last week, Kinnear indicated that she was still sifting through the public comment before making her decision.

The vote comes three weeks after Mayor David Condon discarded two outside candidates for chief and appointed Meidl, sparking outrage among those who participated in the vetting process.

In the aftermath of former Chief Frank Straub's forced resignation, Condon hired a recruiting firm and assembled a selection committee of nine city leaders and community members to help whittle down the original list of 31 candidates. He also arranged four interview panels, totaling more than 40 people to vet the finalists.

Those who participated in those events expressed frustration with Condon's unilateral decision to appoint a man who did not apply for the job and initially stated he did not want to be chief.

In February, Condon had reiterated his commitment to using an outside firm to recruit a police chief through a national search.

"We will do a national search and the citizens will have the best person to fill the job," Condon said then. "One of the key things the PLAC suggested was to use an outside firm ... As they provided feedback on what would be their prerogative, the vast majority of them thought we should use a recruiting firm to recruit nationwide."

Following the announcement earlier this month, Condon also announced that he would not, at that point, seek approval from the City Council, as is required by the city's charter, "out of an abundance of caution and concern for [Meidl] and his career."

That prompted the city council to schedule two community forums followed by tonight's vote.
"Had Craig Meidl gone through the process and come out as the top candidate, we'd be having a very different conversation," Stuckart says.