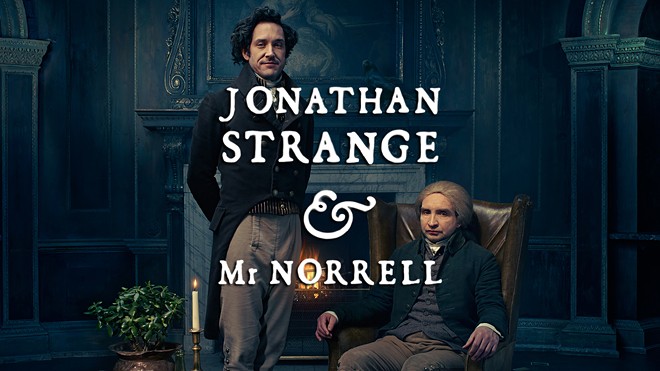 The BBC's adaptation of Susanna Clarke's popular book was engaging, but misses the mark in some major ways.
After breezing through the incredible first season of Stranger Things, and also recently tearing through the thrilling The Night Manager (which won an Emmy last night), this past weekend I faced the challenge of what to binge-watch next. After a cursory scroll through Netflix's homepage, there was one title that caught my eye: Jonathan Strange and Mr Norrell, new to the streaming service this month.

No one wants to waste a weekend binging a show that ends up being terribly written or produced, so after a quick check on Rotten Tomatoes (90) and Metacritic (73), I was satisfied that jumping into this seven-part miniseries from the BBC, released last year, would be worth the time. A brief summary of the show had me sold, too — a tale set in an alternate historical universe, early 1800s England, in which magic is real but has been seemingly lost on the British Isle for the past 300 years. Two magicians, the show's title characters, set out to bring magic back into a respectable status fit for the "modern era."

The series is adapted from a 2004 bestselling novel of the same name by British author Susanna Clarke. As a major fan of both period pieces and anything relating to sci-fi and fantasy, I thought, this is it — this is my next series to obsess over!

However, after finishing off the seventh and final episode last night, I was left quite disappointed, confused and let down by my high expectations for the magical world of Jonathan Strange and Mr Norrell.

While I've not read Clarke's epic, 800-page novel that the series was adapted from, I have to hedge a guess that many of the world's intricate details — such as background on the multitude of its characters — simply did not translate well to screen. Though I can't imagine this story would have been better served if condensed into a feature film-length format. Nor does it seem that more episodes were needed to fill in the gaps.

The most glaring problem with Jonathan Strange and Mr Norrell is a lack of clearly defined or believable motivation in almost every character who matters — and there are a lot of them.

We're first introduced to the studious and steadfast Norrell (played by Eddie Marsan), a quiet man who'd prefer the solitude of his library and his books about magic, but decides to reveal his talents to a group of "magic history" aficionados.

These men (apparently women were not allowed or able to perform magic in this universe. Whether this plot point is a symptom of the story's period, or an unfortunately intended detail in Clarke's book, was never explained) have formed a club to simply study and talk about the glorious bygone days of English magic. Naturally, Norrell's revelation makes him an instant celebrity.

In this alternate universe, the presence of magicians and the use of their powers has been absent from the cultural lexicon for the past 300 years. No one knows why magic was abandoned, and even by the series' end, it's still not clear that this question has been resolved.

Norrell's talented counterpart, Jonathan Strange, is a hopeless romantic with an effervescent and likable personality. Played by Bertie Carvel, Strange's oft-manic demeanor and wildly unkempt hair seems an unmistakable reference to the late Gene Wilder's Dr. Frankenstein. Strange stumbles upon magic when a raving street magician tells him he's destined to become great at it. Strange then jokingly attempts to perform a spell, and when he succeeds in doing so is launched into a fast-rising career as Norrell's prodigy apprentice.

To Norrell's dismay, though, Strange is set on pushing the limits of "English magic" (no reference to the status of magic in any other country is ever mentioned, leaving audiences confused as to whether it even exists elsewhere in the world) and to discover the secrets of the fabled Raven King, the last known great magician. Norrell and a bumbling cast of supporters, whose purpose of entrance into the story was lost on me, are focused on the one task of making magic a "respectable" occupation, which means not dabbling in anything unfit of a gentleman, or otherwise malicious.

While the series' title characters do reveal their emotions and motivations at a sluggish pace — for Norrell, respect and notoriety for his work, and for Strange the love and support of his wife, but also an insatiable curiosity to push magic as far as he can — the rest of the characters are flimsy and forgettable.

Strange's pretty wife Arabella has no depth beyond her role as his unwavering cheerleader who exists only to support and motivate him toward success or revenge. Norrell's eager band of cronies are hollow and portrayed as unbearably comedic versions of the manipulating, power-hungry social and political climbers they represent. 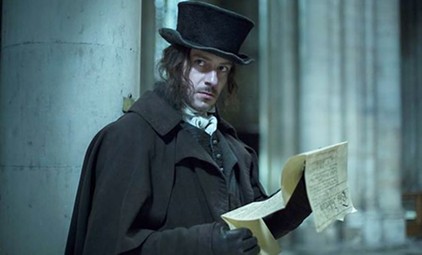 Norrell's brooding assistant Childermass was one of the most interesting characters of the show.
I was also disappointed that we never seemed to clearly understand what drove the story's villain, a malicious fairy whom Norrell unwittingly bargains with to bring a woman back from the dead (going against his own belief to never resort to darker forms of magic). A classic fantasy bad guy trope, the fairy's desires and powers wreak havoc on Norrell's and Strange's relationships and careers and must be stopped before all is destroyed.

Besides Norrell and Strange, who fail to be believable heroes in too many moments, the only others worth caring more about are barely given enough screen time — Norrell's dark and brooding assistant Childermass, who seems to know much more than even his master Norrell at times, and the prophesying lunatic street magician Vinculus.

While Jonathan Strange and Mr Norrell was filled with too many small disappointments for me, the ambitious mini-series still rises above many other forgettable works in the great vacuum of televised cinema. I definitely plan on picking up a copy of the novel source material soon to give this world and its characters a second chance.

Netflix is releasing a new movie every week in 2021 — but will they be any good?