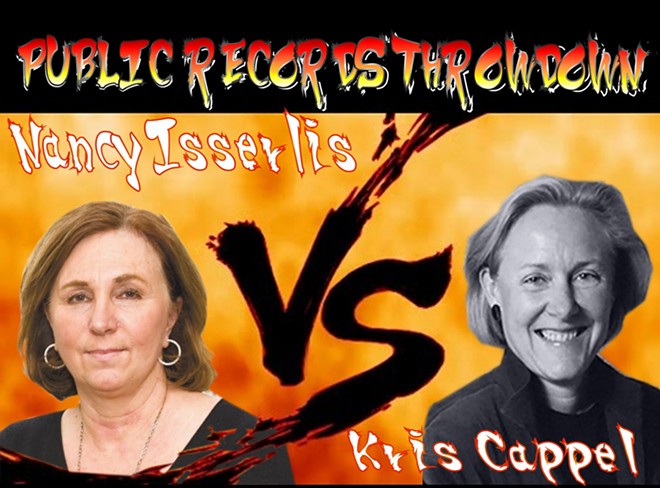 Daniel Walters photo illustration
Basically like this, but more exciting.
Nancy Isserlis is no longer the city attorney of Spokane. Kris Cappel has already completed her independent investigation into the way the City of Spokane handled the resignation of former Police Chief Frank Straub.

But a fight between the two over the Cappel report's conclusion has continued. Cappel had accused Isserlis of intentionally withholding crucial documents until after the election. Isserlis, through her attorney, accused Cappel of defamation.

And now, in a poetic touch, both sides are gathering ammunition through the City of Spokane public records process — the same records process that Isserlis has been accused of impeding.

On August 19, John Spencer Stewart made request to the city of Spokane, focusing — not on Straub — but on Cappel's investigation. Stewart, part of the team that successfully defended Isserlis in the lawsuit filed by Straub against her and other city officials, requested a vast variety of documents pertaining to the investigation, including:


"email, text messages, voice messages, telephone logs which including the time and date of telephone calls made and received, and any other form of communication between and among City employees, City Council members including, but not limited to, Council President Ben Stuckart and their staff, the investigation liaison group of four (Laura DeBacker McAloon, Brian McClatchey, Breean Beggs, and Rick Romero), and the Kutak Rock, LLP."

On Aug. 29, Stewart followed up with the clerk's office, clarifying that he wanted his request to go back as far as when "discussion of the engagement of a private investigator or firm [first] took place."

He also requested the curriculum vitae for Cappel and any other members of her investigatory firm who may have authored the report.

An email sent Friday, Sept. 16, from the City Clerk's office indicated that the full request, as it stood, could take a year to complete. It also indicated that the city had hired yet another local attorney, John , to advise it on public records issues. is part of the firm defending the city against the records lawsuit from retired SPD cop Brian Breen.

But Cappel's been requesting records, too. On Aug. 17, two days before Stewart's request, Cappel asked the clerk for:


1. Any written record created by any member of the City Attorney’s Office during the period March 31, 2015 through the date of this request, that references directly or indirectly Monique Cotton, Frank Straub, Selby Smith, Rick Dobrow, Mark Griffiths, Erik Olsen, or Tim Schwering.


This had been sparked by a letter Stewart sent Cappel last month, accusing her report of being "unsupported and unsupportable by competent evidence," and "manifestly inaccurate." Stewart lamented that her report would likely have a "permanent indelible effect upon the characters and careers of many well-meaning entirely innocent public servants."

He accuses Cappel of having "acted as the judge, and executioner" and said her conduct "borders on the appearance of impropriety."

"Notwithstanding your introductory comments to each interviewee that you were engaged as an 'independent fact finder,' our review of your report demonstrates repeatedly that you were neither independent nor a fact finder in this process," Stewart writes.

Stewart's 36-page letter then cites a slew of instances where city officials had testified that they did not withhold documents. It reiterates the argument that the scale of the records requests and the looming threat of litigation, not political considerations, delayed the production of several documents until after the election.

And, crucially, he suggested that Cotton's sexual harassment complaint had been investigated and officially documented.


The Complaint was investigated and documented by the [city attorney's office] as well as Theresa Sanders as well as several others within the department, and the conclusion reached was that there was no evidence to support Ms. Cotton's allegations.


"Therefore, we herewith demand that you withdraw your entire and that you provide a written public apology to the men and women of the [city's attorney office] in Spokane, particularly Ms. Nancy Isserlis, Ms. Erin Jacobson and Mr. Pat Dalton," Stewart wrote.

Cappel, to say the least, declined to apologize or withdraw her report.

On Aug. 17, she responded with her own fiery four-page letter, condensing all the evidence for just how unusually the city attorney's office had treated the key documents. She listed the many ways she'd tried to interview Isserlis, only to be rebuffed by the mayor's and city attorney's office.


I requested the Mayor to agree to a limited waiver of the attorney-client privilege that would permit me to interview members of the City Attorney’s Office about the public records issue, as well as other issues. I did not receive a response from the Mayor, but was eventually informed by the Committee that the Mayor was not willing to waive the privilege.

"In short, there were a number of areas in which Ms. Isserlis could have provided information, and there were ways to navigate the attorney-client privilege if she had been truly interested in participating in this investigation," Cappel wrote. "It is unfortunate that Ms. Isserlis, who made the deliberate decision not to participate, is now seeking to cast blame on others."

She also took note of the claim that that Cotton's sexual harassment complaint had been officially documented.


According to your letter, Ms. Isserlis and other members of the department (presumed to be the Law department) documented Cotton’s complaint. No such records have been produced to us and there is no mention of those records on any exemption log of which we are aware. If you possess those records, we are willing to review them to determine if they impact our findings. To clarify this issue, we are filing a public records request with the City.

Stewart scoffed at Cappel's response, saying that if she wasn't going to withdraw her report, she shouldn't have even bothered replying.

“We consider her response to be nothing more than four pages of unsupported prose. If your client does not intend to retract her libelous report, there is no need for her to respond with another misdirected letter,” Stewart wrote in a letter to Cappel's firm, Seabold Group, according to the Spokesman-Review.

Currently, both Stewart and Cappel's records requests are winding their way through the long records process. Several CDs of information have already been provided to Stewart, including the personnel files for Straub, My Spokane Customer Service Director Carly Cortwright, Police Planner Jason Franklin, and former Director of Strategic Initiatives Tim Schwering.

Stewart has also received the trove of emails between the investigation's joint committee, obtained last week by the Inlander. The emails show an ultimately unsuccessful effort over two months to attempt to get Cappel access to uncensored documents.

Last month, Stewart wrote that "Ms. Isserlis and her staff attorneys offered many times to participate and cooperate in the investigation so long as it did not violate ... attorney-client privilege."

In fact, the records suggest the opposite.

They show considerable efforts, supported by Cappel and the joint committee, to allow Isserlis to participate in the investigation without violating attorney-client privilege. They do not show any willingness by Isserlis to work with them to find a solution.

The joint-committee proposed allowing Kutak Rock, the firm overseeing the city's legal defense in the Straub lawsuit, to hire Cappel. That would allow Cappel to see un-redacted documents and discuss attorney-client privileged issues without risking exposure litigation. The deal would have represented a compromise for the city council as well: Stuckart had previously rejected a similar deal in executive session, concerned about the independence of such oversight.

"We would likely be able to get the agreement of City Council to do this if it would resolve the ethical questions and litigation defense concerns that members of the city attorney's office have cited in declining to participate in your investigative interviews," the joint committee wrote in a letter to Cappel.

But while Cappel extended the offer to Isserlis on May 9, Isserlis did not even respond to the letter, according to Cappel.

While last week's failed recall attempt has many in the city looking ahead, the ongoing records requests, the still-pending ethics investigation, and the records lawsuit represent unresolved issues.

"Some people are like, let's all have 'Kumbaya,' and move forward," says City Councilman Breean Beggs, who served on the joint investigation committee. "[But] we still have to delve into what the hell happened, particularly with the records."

Initially, Beggs says, Cappel had considered working with Kutak Rock after her first report in order to examine still-redacted documents and see if it impacted her conclusion.

But shortly after publishing her report, Cappel came under a flurry of attacks. City Council President Ben Stuckart accused the mayor's joint committee appointees of attempting to influence the final draft of the report. And the mayor's administration lambasted the conclusions drawn in the report.

On Aug. 3, Cappel resigned from her role as investigator for the city.

"The resignation of Seabold Group is in direct response to allegations that have been raised that the findings and conclusions of the report were inappropriately influenced," Cappel wrote in an Aug 3. letter. "Although there have been discussions regarding additional work, Seabold Group cannot in good faith, in light of the attacks which have been launched, continue in this assignment."

She also discussed the other hurdles that had been thrown into her path, complicating her efforts to get to the truth:

"Throughout this process, I made every effort to be candid and clear about the challenges we were facing given the Mayor’s decision to make participation voluntary, the City’s decisions regarding document production, and the refusal of material witnesses to participate."