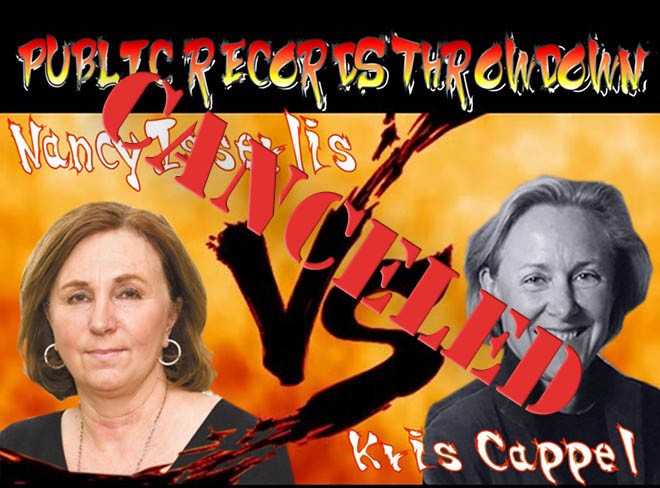 Daniel Walters photo illustration
Like the other pieces of fallout from the independent investigation, the dueling records requests from independent investigator Kris Cappel and the lawyer for former City Attorney Nancy Isserlis have quietly gone away.
Earlier this year, former City Attorney Nancy Isserlis was outraged by the conclusions of independent investigator Kris Cappel. In particularly, she expressed outrage by the accusation that she had intentionally withheld damning records about sexual harassment allegations against former Police Chief Frank Straub until after last year's election.

As the Inlander had reported, a series of scathing letters were traded back and forth between Cappel and Isserlis's attorney, John Spencer Stewart, sparking both to make major records requests.

Contrary to Cappel's conclusions, Stewart argued that the sexual harassment complaints about the chief had been properly documented. In response, Cappel filed a records request with the city on Aug. 17, asking for records from the city attorney's office referencing a number of different parties involved with the Straub scandal.

Two days later, Stewart filed his own massive records request about aspects of the investigation itself.

This set the stage for a lengthy public records battle that could stretch late into next year, possibly revealing new information about the city attorney's office or the investigation.

But just as essentially every other loose end regarding the Straub scandal evaporated after the mayoral recall attempt was rejected, the records request issue quietly faded away as well. Still, handling the two requests already cost the city thousands of dollars.

First, the city clerk's office had asked Cappel a series of questions to clarify her request.

"If no such clarification is received by September 26, we will consider your request concluded and closed, and a new request for any records you may be seeking will need to be made after that date," City Clerk Terri Pfister wrote in an email.

Then, starting on Sept. 8, the city attorney's office hired John , an attorney with Stevens Clay, to handle the two big requests. was the same attorney the city paid nearly $8,500 to help settle the records requests lawsuit filed by former police officer Brian Breen.

According to city invoices, helped the city search records and negotiate with the requestors over their requests. He even helped the city draft language in an email to the Inlander, which had been asked to be included within the requests. In all, invoices show the city paid over $7,600 for public records work, primarily to handle those two requests.

By the time Sept. 26 rolled around, Cappel hadn't responded, so her records request was canceled. In the meantime, was negotiating with Isserlis's attorney.

On October 6, he sent a letter to Stewart, alluding to multiple conversations.


Thanks for another good discussion this morning concerning your records request to the City. I'm sending this email per our discussion.

Based on information I shared, we discussed an agreement to suspend the City's work on your request for 30 days. This would include of course, that you and I would hold in abeyance the continuing efforts we've been engaging in to arrive upon an agreed clarification of your request.

The City would be agreeable to this. So I understand you plan to talk to your client, and let me know whether there's agreement from your end.

And by Nov. 10, suggested that Stewart's records request may be unnecessary.

I'm just checking in. We spoke last Thursday, I believe. You were going to talk with Nancy and we were going to connect again this week. As I told you Kris Cappel abandoned her request some time ago and we've no reason to believe she has any intention of ever resurrecting it. The Breen lawsuit has been settled, and things seem to have really gone quiet and City business seems to be moving past all of this. Anyhow, bottom line, the City is still holding your request in a suspension status. I'm wondering if you've talked with Nancy now, and made any decisions as to the future of your records request.

So why don't you give me a call or shoot me an email when you're ready and have a moment, John?


Stewart agreed to suspend the records requests for about four months.


We would prefer to have the FOIA request placed "on suspense" for 120 days. We can then visit at that time.

In other words: Officially, the records request from the former city attorney's lawyer hasn't been abandoned. But for now, it's been put on .