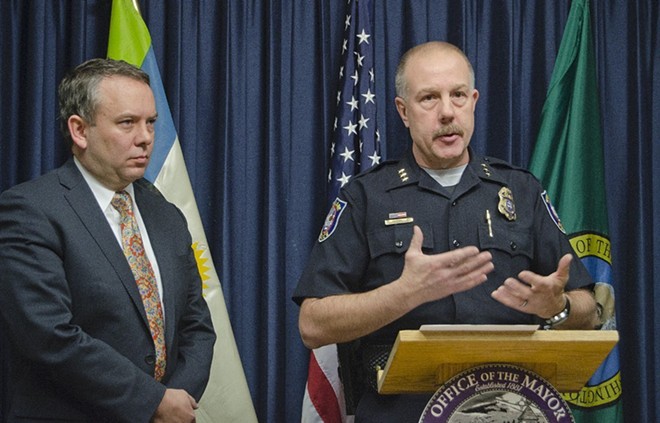 An independent investigator says Mayor Condon's administration purposefully withheld relevant records about ousted Chief Frank Straub until after his re-election.
It took more than half a year to complete — with delays, internal battles and controversies hammering it right up to the very end. It's 126 pages. And that's the summary.

But now the findings of an independent investigation into how the city of Spokane handled allegations concerning former police Chief Frank Straub has been released. We're still combing through the documents, but we've already identified scores of revelations.

And remember, this is without  the independent investigator, Kris Cappel, getting to see every document.

"Based on all of the evidence we considered, we conclude that [City Administrator] Theresa Sanders and [City Attorney Nancy] Isserlis intentionally withheld information from the City Clerk about the existence of the documents at issue with the intent and purpose of delaying the production of those records until after the Mayor’s election," Cappel wrote.

And, considering Condon became the first Spokane mayor re-elected in over 40 years, it worked.

City Council President Ben Stuckart says he and his attorney consider intentionally withholding responsive records to be a violation of the Washington state public records act.

Remember, Condon, Sanders and City Spokesman Brian Coddington have all lambasted their critics, charging that criticism against them on this issue was "politically motivated." In fact, Cappel charges, all three manipulated the public records process with the intent and purpose of politics.

In a statement, Sanders continued this tack, accusing Cappel of reaching a predetermined conclusion.

“I am angered and troubled by the reviewer’s statement that I intentionally withheld information," Sanders says. "She has reached a predetermined conclusion that is inconsistent with the statements and documentation utilized in preparing her report."

She quoted the City Clerk Terri Pfister's statement denying that the mayor, Sanders or Coddington had asked her to withhold or delay the records.

But that wasn't Cappel's argument. Her conclusion argues that Sanders knew key records existed, but didn't provide them to the city clerk.


Ms. Sanders was aware that the November 24 records existed but never informed the City Clerk. She affirmatively represented that she had no responsive records or that her records were forwarded to legal in connection with potential litigation. Ms. Sanders did not describe the records she forwarded. Ms. Sanders also never requested her staff to search for the relevant correspondences, which were stored electronically and in hard copy in the Mayor’s office, and produced to this investigator by the Mayor’s staff within an hour of requesting the documents.


Condon and Coddington were also aware of the Sanders texts and notes, Cappel wrote, but there is no evidence they ever told the city clerk of their existence.
Ironically, earlier this year, Condon also angrily accused Stuckart and former Councilman Jon Snyder of attempting to "circumvent the public records process" by using their campaign emails, instead of their city email addresses.

But Condon has insisted upon the innocence of his entire staff. In a message through his campaign, Condon said he had "serious doubts" about some of the reports findings.

"Let me take this chance to assure you that while our processes were not perfect, I did not intentionally keep, and I believe no one in my Administration worked to keep, information from the public in the public records process," he wrote.

2. In her original report released to the city council on Tuesday, Cappel also said that Coddington and Condon intentionally withheld records before the election.

But after conversations the mayor's two appointees to the committee overseeing the investigation, she changed her mind. The evidence against them was mostly circumstantial, she said.

"The conclusion that Mayor Condon and Mr. Coddington withheld information with the purpose and intent of delaying the release of the records was based on a preponderance of evidence standard, which is a very low threshold of proof," Cappel says. That was not the case with Sanders and Isserlis.

“I am deeply concerned that there appears to have been interference with the report,” Stuckart said in a statement.

But Cappel denied the conversations changed her mind and McAloon denied any attempt to interfere.

"No one attempted to influence me in any way," Cappel said in a letter to the council. "I regret that my actions have added to the controversy surrounding this investigation," she wrote.

Cappel also said she had spoken with City Councilman Breean Beggs, but Beggs says their conversations were unrelated to Condon or Coddington.

In a November press conference, Condon denied having any influence over the public records process.

"Would there have been a hampering of the process if I I would have started saying I want to see the records before they’re released to the public?" Condon said.

3. Assistant City Attorney Pat Dalton "deliberately delayed" the release of the Straub's "I love you" text to Monique Cotton's until the election.

The city clerk's office, Cappel wrote, was preparing to release the documents containing the text on Oct. 29. But Dalton, without explanation, asked for more time to review the records. He had already concluded there was no reason to withhold the records. And he never reviewed them. Instead, he went on an extended vacation.

In a statement today, Dalton — who refused to be interviewed by Cappel — said he hadn't read the report, but denied he'd ever manipulated the public records process for political reasons.

To the best of my knowledge, at no time during my review of records pursuant to various public records requests did Mayor Condon, City Administrator Sanders, City Attorney Isserlis, or Communications Director Coddington ever suggest, ask, or direct that I or anyone else in this Office delay our review process for any reason. None of these individuals has ever suggested, asked, or directed me to perform any aspect of my job in any particular way for political purposes; nor have I ever done so.”

It was only after the city clerk's office contacted the city attorney's office again — after the election — that another city attorney reviewed the documents again, and released them to the public.

Dalton was the same attorney who warned councilmembers about consequences for waiving confidentiality for executive session.

4. Cappel believes the city intentionally didn't document important information in order to hide it from the public record.

Ms. Isserlis and Ms. Jacobson intentionally did not document any of their interviews or their discussions with Mayor Condon and Ms. Sanders. Mayor Condon and Ms. Sanders also did not document any of their discussions related to Ms. Cotton’s complaints other than the handwritten notes prepared by Ms. Sanders referenced above. We conclude that the absence of documentation was intentional to avoid creating a public record of Chief Straub’s inappropriate behavior, as well as Ms. Cotton’s.

"She was complaining about something, yes," he told Cappel.

6. Cappel concludes Condon did not fire Straub because of Cotton's sexual harassment complaints.

Therefore, Cappel concludes, he didn't lie to councilmembers when he told them in executive session that Monique Cotton did not play into his decision to fire Straub.

7. The city administration continued to mislead and omit important information, even after the November revelations about Monique Cotton's sexual harassment allegations became public.

In November, after the mayor's election, the media broke a slew of details about promises made to find city spokeswoman Monique Cotton another city job after she lodged an informal complaint with the mayor's office, alleging Straub had "grabbed [her] ass and tried to kiss [her.]"

The city council demanded answers. And they got them — sorta. But according to Cappel, those answers were "misleading and omitted material facts."

However, the rumors about a relationship between Cotton and Straub were persistent.


"There was substantial evidence from multiple sources that Chief Straub and Ms. Cotton had a close, mutually friendly work relationship for a period of time, and that during that period Chief Straub was perceived as being overly protective of Ms. Cotton."


Straub did tell attorneys they had a "mutually flirtatious" relationship that had ended before Cotton brought her allegations, Cappel says. The Condon administration long knew about the "persistent rumors of a romantic relationship" between Straub and Cotton but didn't do anything about it until after she brought forward the sexual harassment allegations.

Heck, Coddington knew of rumors since 2013. He says he shared that information with Condon, but Condon told Cappel he didn't know about it.

"Mayor Condon was asked the question several times, and finally said after some effort on this line of questioning, that Straub admitted to a relationship with Cotton that he 'had to bring back to a more professional " Cappel says.

On Aug. 21, she sent an email to Theresa Sanders: "I request the city investigate and reveal the identities of these individuals, their motives, and take appropriate disciplinary actions."

Sanders promised she would, and later brought up the concern with City Council President Ben Stuckart. In our interview with last year, Stuckart was offended that Sanders accused him of being the source of the rumors.

10. Cappel still doesn't know how much information has been withheld from her because of attorney-client privilege.

11. Eight important witnesses would not participate in the investigation.

Ironically, Erin Jacobson DID speak with Cappel initially. But that was before Frank Straub filed his lawsuit.

12. City Spokesman Brian Coddington knew about the sexual harassment allegations related to Cotton — and intentionally hid it from the media.

"Monique's move was strictly managerial," Coddington told The Inlander in September, concerning why Monique had been moved from the police department to the parks department. "End of story."

In fact, Cappel's report reveals Coddington was in the room while Sanders was having her telephone conversations with Cotton about the sexual harassment, although he said he could only hear Sanders' side of the conversation.

He told Cappel that, before Straub's forced resignation, he knew about the texts from Cotton to Sanders outlining her concerns. He knew about the Sanders notes laying out the sexual harassment allegations. He was in the room during the Sept 21 confidential executive session where the mayor told the council he'd asked for Straub's resignation — the day before Coddington told the Spokesman-Review that he didn't believe Straub had lost his job and that he didn't believe Straub was in danger of losing his job.

In his interview with Cappel, Coddington said he promised Cotton he'd keep her allegations confidential. Cappel asked Coddington how far he was willing to go to protect her secret.

"I didn't disclose it during questions from media and others," Coddington responded. "None of us felt like we had the latitude to break that confidence."

In an interview in December, The Inlander asked Mayor David Condon the following question, with Coddington sitting in the conference room: "Nancy Isserlis and Theresa Sanders and you all knew about the sexual harassment allegations before Sept. 22. I'm wondering if you'd told anyone else in your administration then."

When Sanders was asked in December who else had known about the allegations, she declined to comment.

"Did the mayor ever talk to you about his conversation with Monique?" Cappel asked in her interview with Coddington.

"He would have later, although I believe the details would have been pretty brief," Coddington responded. "Because Theresa and I had already had the conversation, and I was generally aware of what the content was."

Check out these Spokane-area coffee shops off the beaten track