Today — after months of revelations, accusations, investigation, and litigation — that solidarity has been replaced by outright hostility.

Condon, who generally couches his statements in cautious politician-speak, let loose both barrels against in a letter sent late in the day Tuesday concerning former federal prosecutor Kris Cappel's investigation into the Straub controversy.

"This letter from him definitely represents the worst," Stuckart says about the relationship between the mayor and himself. "It has gotten worse than it ever has been in the last four-and-a-half years."

The letter was a rejection of a proposal supported by Cappel, the city council, and the joint committee made up of four members appointed by the mayor and the city council. The proposal would have hired another attorney, Michael Harrington, to cover Cappel under the city's attorney-client privilege, allowing her to see confidential documents after her initial report was completed.

But, in an unusual move for Condon, the letter crackles with outraged language against Stuckart.

“I will not aid Mr. Stuckart’s political agenda at the expense of the taxpayers,” Condon wrote.

That the proposal would "compromise the City's ability to defend itself in the Straub litigation — at an even greater expense to the taxpayers," was unacceptable, Condon wrote.

The mayor wrote that Stuckart’s threat to refuse to pay the outside law firm defending the city from the Straub lawsuit unless the mayor agreed to hire Harrington amounted to “holding ransom” the contract. He wrote it was "dramatically beyond the limits of what a reasonably prudent officer of the City should do to protect the taxpayers from unnecessary liability."

"By acting outside the appropriate bounds of his office, Council President Stuckart is exposing the City and its taxpayers, as well as himself, to legal liability," the mayor wrote.

Not only but Stuckart’s request to meet with the mayor to discuss the issue was “unnecessary and belated,” Condon wrote, adding that Stuckart "had declined at least two offers to move this process along by appointing counsel to oversee the investigation."

Condon threw in another salvo, accusing Stuckart and former Councilmember Jon Snyder of attempting to "circumvent the public records process" by using their campaign emails, instead of their city email addresses, to hone language in the initial request for answers from Condon about Straub.

"But for the accidental inclusion of [legislative assistant Adam McDaniel's] official email, this email may have never have been discovered." Condon wrote. “I have long been convinced that the Mr. Stuckart and others have had a political motivation in their criticism of my handling of the matters surrounding Straub."

Stuckart is no less outraged in his response.

"I don’t appreciate the blatant lies in it," Stuckart said Wednesday morning about Condon's letter.

Stuckart says that he'd used his campaign email in November because he was working from his mom's house on Thanksgiving without easy access to his city email. The whole reason he emailed his legislative assistant's city address, Stuckart says, was to ensure that it would be included in the public record.

He says the mayor is wildly mischaracterizing the Harrington proposal he was rejecting.

He says he hadn't previously mentioned the mayor's proposals to have counsel oversee the Straub investigation because it had been discussed in a confidential executive session. But since the mayor essentially waived that confidentiality by discussing that proposal in his letter, Stuckart argues he has the right to discuss those proposals as well.

Both were bad ideas for the same reason, Stuckart says: The lawsuit defense team's goal is to limit the city's liability; while the independent investigation's goal is to find the truth, even if it creates difficulties in Straub's lawsuit.

"I see it as a misrepresentation to say that we were offered independent counsel twice, and not say that it was Hession," Stuckart says.

The city declined to confirm or clarify Stuckart's statement, noting that officials are allowed to mention the topics of executive session meetings, but are not allowed to discuss the contents. The mayor also declined to identify which attorneys were giving him guidance on the and whether they were simultaneously involved with defending the city or the mayor in the Straub lawsuit.

Overall, Stuckart thinks the accusation that his stance is "politically motivated" is ridiculous. The Harrington proposal wasn't even his idea, he says. It came from Councilmember Breean Beggs as part of the joint committee overseeing the investigation.

"The public wants to know," Stuckart says. "I’m getting stopped every day on the street. People want to know exactly what happened."

Or, from another point of view, suggests, aren't all arguments between politicians political?

"I don’t know how politicians having a disagreement about city policy isn’t politics," Stuckart says.  "We’re politicians and anything a politician does is political. That would be another way to look at it."

This isn't the first time the mayor has thrown in accusations of political bias while defending  his administration's handling of the Straub controversy.

Other members of city officials have used similar tactics, countering serious accusations of impropriety by arguing the accuser was playing politics.

She explained that Cotton was given an unusually high when moving to her new position in the Parks Department as an "enticement."

Both statements were shown to be false after Straub's forced resignation in September, leading Condon's mayoral challenger Shar Lichty to file an ethics complaint.

But the vast majority of Sanders' response to the ethics commission was dedicated not to defending herself as to the veracity of the accusations, but to condemning Lichty for bringing them.

Sanders wrote that she was "disappointed and offended that Ms. Lichty would use the City's policy and process for personal gain." She accused Lichty's complaint of "politically motivated" in an attempt to "generate media attention for her campaign."

She called on the ethics commission to dismiss Lichty's complaint as "malicious, frivolous and having been brought for the purpose of personal and political gain."

She wrote that Lichty's "violation of the public trust by submitting frivolous claims for personal and political gain caused harm... I ask the Commission to hold her accountable for causing harm and instruct her that frivolous claims will not be tolerated."

The ethics commission, however, agreed with Lichty that Sanders had violated the city ethics code.

Later, the press would learn the full truth: Sanders was far more intimately aware of problems between Cotton and Straub than the commission knew at the time. She was the one commissioned to look into Cotton's claims that the Straub had "grabbed her ass, tried to kiss her" and find her a new job.

On May 22, just hours before Straub had been fired, Coddington was asked by the Spokesman-Review if Straub had lost his job.

“I have not heard that,” Coddington said. "I don’t believe that’s accurate.”

Then, Coddington was asked whether Straub was in danger of losing his job.

“I have not heard that,” Coddington said. "I don’t believe that’s accurate.”

Coddington's response to the Ethics Commission is marked by a nearly identical first-of-all-how-dare-you style as Sanders' response.

"I'm asking that this Commission her accountable for filing frivolous, politically motivated allegations," he wrote in his response. "Dismiss her claim for what it is: frivolous, groundless and brought for the purpose of harassment, in this case, political benefit."

However, Coddington did not argue that he had no knowledge that Straub's job was in danger. He says he interpreted that question as "a rephrase of the first question," so he answered it in the same manner.

While the ethics commission dismissed the complaint against Coddington as "groundless," legal filings later revealed that Coddington had sent Straub a draft of the press release announcing his resignation dated Sept. 22, complete with quotes from David Condon and Frank Straub, a mere half-hour after he got off the phone with the Spokesman-Review. 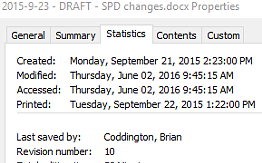 Metadata showing the draft of the press release announcing the police chief's resignation had been created on Sept. 21, the day before Coddington told a reporter he had no knowledge of Straub's imminent departure.
UPDATE: Furthermore, metadata from Coddington’s Word document draft reveals the press release announcing Straub’s resignation had been initially created on Monday, Sept 21, at 2:23 pm — nearly a full day before Coddington told the Spokesman-Review he hadn’t heard Straub was in danger of losing his job.

While it possible that someone else created the document and only forwarded it to Coddington after his interview with the Spokesman, Coddington did not this before the ethics commission. Instead, he lambasted Lichty for not being able to prove her assertions.

The Inlander reached out to Coddington mid-day Thursday, but he was not immediately available for comment. We’ll update this post if he responds.


Ben Stuckart and Richard Rush
Stuckart, however, has leveled the "motivations are political" accusation before. A little more than a week after former city councilmember Richard Rush was terminated as Councilwoman Candace Mumm's legislative aide, Human Resources Director Heather Lowe sent out a letter to over 60 department heads and mayoral cabinet members.

She wrote that Rush had "been repeatedly calling and harassing female employees at the City of Spokane since he was terminated from City employment last week," and that "Rush has been contacted by the employees’ supervisors that this must cease immediately."

Lowe noted that Rush was not allowed to ask employees out during work hours, and threatened a "no-contact" order if he continued.

"I think once someone gets fired and you’re in the middle of an election season things get political," Stuckart said a few weeks ago, noting he hadn't been sent the email.

Rush has also speculated that the whole thing was politically motivated:

"Given my political success, it's no surprise," Rush told the Inlander last month. "Countervailing political forces would just as soon see me sidelined."

Today, Stuckart reiterated that he doesn't think it was necessary for Lowe to send such a widespread email.

"They were trying to make it more than it was by sending a letter out," Stuckart says.

Emails obtained by the Inlander confirm that at least one young female employee had independently raised concerns in March that she'd felt harassed by the frequency and nature of her interactions with Rush. (The email from the employee's supervisor to Lowe was titled "Harassment issue.")


Phone logs show that Rush called that female employee's work phone twice from his cellphone on April after he was terminated.
As a result, the employee was given a new city phone number.

Rush has confirmed that the director of the Parks Department and the supervisor and manager of the Treatment Plant both contacted him and told him to stop contacting specific female employees.

However, he maintained that these messages were the first time he was told his behavior was inappropriate and that these employees did not want to be contacted. He says he hasn't called those specific employees since.