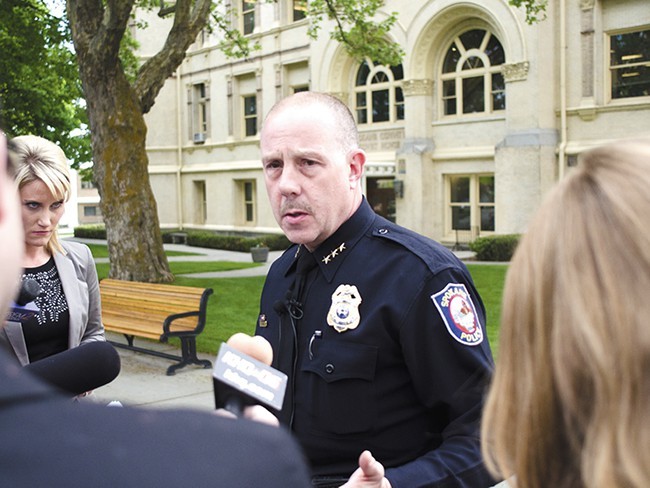 In 2013, Straub had big plans to reshape the Spokane Police Department. By the end of 2015, before his ouster, he was clashing with city administration about the direction of the department
On August 18, 2015, a month before Police Chief Frank Straub would be forced to resign, the chief laid out a vision for the future of Spokane Police Department facilities in a memo to the mayor and city administrator.

It was one, however, that diverged significantly from the direction desired from City Hall.

For example, Straub wanted to make one thing very clear: The idea of moving the headquarters for police and fire department to City Hall was a bad one.

Police headquarters will remain in the Public Safety Building.

We do not believe City Hall provides a viable location for several reasons:

- The presence of the police department increases the threat level to City Hall, which is already a target.

— As we learned from Mayor Maddox, government resources should be spread out to ensure continuity of government in a crisis. Simply put, if all our resources, including police and fire are in City Hall, and we lose city hall because of a Natural Disaster or Manmade Attack, we are done.

— If we move police administration into City Hall, we would have to move associated units and investigations as well. This would require two floors in City Hall. We say because the chief and his/her immediate staff cannot be removed from police operations. To put it in context, it would be untenable for the mayor and city administrator to be in one building, and the rest of city government to be dispersed throughout the city.

But in a brief email sent the next day, City Administrator Theresa Sanders made it absolutely clear. Mayor David Condon planned to move the fire and police department to City Hall.

"On the HQ topic — Mayor has been clear that Fire and PD leadership will be at City Hall," Sanders wrote. "Many details need to be worked out [on] that topic."

The strange thing here is that Sanders had moved former police spokeswoman Monique Cotton to her Parks department position in City Hall precisely to get out of Straub's orbit. (Cotton had informally accused Straub of sexual harassment.)

Texts between Cotton and Straub's assistant, Angie Napolitano, show Cotton was worried about running into Straub as she gathered up her things to move to a new office.

If Straub had been moved to City Hall without relocating the Parks department, it could have made things more difficult for Cotton.

In the months since Straub was forced to resign, however, the push to relocate police and fire leadership appears to have been abandoned — or at least set aside amid the current search for a new chief.

"I was not part of any of those discussions [in August,]  but my sense is that move has been tabled," Assistant Police Chief Craig Miedl wrote in an email. "I have not heard of any impending move."

Coddington says the issue had not been brought up with the current interim head of the Police Department, Jim McDevitt. Pressed on whether Mayor Condon was still pushing to relocate the fire department and the police department to City Hall, Coddington would only speak  generalities.

"I don't know if there's any ongoing conversation for asset management as it relates to police and fire," Coddington says. “There’s a lot of discussions all the time about the best use of real-estate and asset management. Anything that would happen in city hall would have a domino effect in other departments.”

Lt. Dave McCabe, president of the Lieutenants and Captains Association, says he had never heard of discussions to move police leadership to city hall.

"I think it would be a ridiculous move," he says. "[SPD] needs to have their leadership in-house. They need to be seen. Being able to call somebody up on the phone is not the same as being able to sit down and talk in person."

Rethinking
But there appeared to be a deeper division between Straub and the city administration. In his August memo, Straub outlined his frustrations with the slow progress the department had in switching to a "precinct model," dispersing police stations throughout the community instead of having them focused in a central location.

“The idea is to put the police right in the heart of the community,” Straub said in 2013, with the opening of the downtown police precinct in the Peyton building near the STA Plaza.

And Condon, back then, was optimistic.

“We’ve been doing things the same way for a long time,” Condon said, “and we may need to switch that up.”

But in the August memo, Straub's irritation with the pace of change shown through.

"Although we have made significant progress and are achieving dramatic results, our operations have been hampered by — (a) the pace of precinct implementation, (b) the lack of a South precinct, (c) the fact that space issues in the Intermodal [Center] remain unresolved," Straub wrote.

He wanted to more firmly establish a South precinct location, noting asset management had identified two buildings that would require minimal construction to work as South precinct buildings. If that didn't happen, he wrote, the city would have to shift from divided into three precincts, South, Central, and North, to be divided into only North and South.

"This change will have impact on our staffing, operations, and [computer-aided dispatch] configuration," Straub warned. "Additionally, the North-South model is inconsistent with key principals of community policing that call for 'embedded' police resources and neighborhood specific strategies.

But in her response, Sanders poured cold water on his enthusiasm, suggesting that he hadn't shown the plan was logistically feasible.

"You refer to slow implementation of precinct model yet I see we are not staffing the precincts (Hillyard and Downtown) we do have,"  Sanders wrote. "It surprises me we have another precinct coming (in fact, ready to go) that we aren't prepared to staff."

She told Straub to develop an affordable staffing model and facilities plan before any other precincts could be added. She messaged Scott Simmons, then director of the business and developer services, to tell him that any other progress on Straub's ideas should wait until a more detailed plan.

"Scott — move nothing else forward until we have a facilities plan in place," she wrote. (Again, a plan we can afford and one we can staff in the current budget.)

Less than a month after Straub was kicked out of his job, the city announced it was shifting to a new direction. The precinct model wasn't dismantled entirely, but the vision the former police chief laid out was abandoned. The police division didn't have the number of staff required, the new police leadership explained.

“We don’t have the staffing levels, nor do we have the financial resources to decentralize,” then-interim Chief Rick Dobrow said in the Spokesman-Review in October. “We are so call-for-service driven that [precinct leaders] had bodies, but they didn’t really have the time to focus on neighborhood issues.”

The Plan For the Plaza
The memo also reveals that, in August, Straub had explicitly planned to shut down the SPD presence at the Peyton Building, across from the STA Plaza, after the lease expired in 2016. It was a major shift from his previous rhetoric, where he repeatedly expressed his desire to keep some police presence in the space.

Although we do not pay for the space or associated utility costs with the current Downtown location, we no longer receive $50,000.00 from [the Downtown Spokane Partnership] to offset the cost of bike patrols. In June 2016, when the lease expires, we should close that location. Once it is closed, we should re-establish our agreement with DSP to be reimbursed with for police services.

A few weeks later, however, then Asst. Chief Rick Dobrow wrote an email to leadership explaining that the downtown precinct was staying put, and the South precinct would move to the Intermodal center instead.

After Straub was ousted, confusion reigned, DSP struggled in vain to figure out what the plan was for the Peyton building. Without much in the way of clear communication from the city, DSP canceled the lease early.

Pig Out in the Park: You ready for more Sir Mix-A-Lot?

Why this list of 30 most "dangerous" cities (Spokane is No. 22) is #problematic