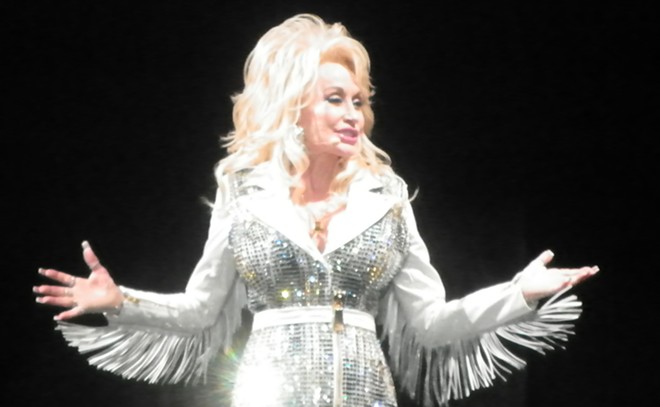 Dan Nailen
Dolly Parton took to the Northern Quest stage last night for a sold out show. She told the audience they aren't real — her nails that is.
She got into "Jolene" rather quickly last night. That's right, THE Dolly Parton walked out onto the outdoor Northern Quest Resort and Casino stage and treated fans to one of her best written works (possibly one of the best of all time) only a few songs into her sold-out show. It was a bit more sing/talky than her original recording, but that got us ready for the rest of the evening full of ... talking. Lots of it.

But that's part of what made the 70-year-old's show so incredible. She talked our ears off, and it was funny and moving. It was like she invited us all over to sit in her parlor one Thursday evening to tell us her life story. The not-so-natural blonde spoke of her poor family upbringing and her faith and her prior and upcoming film/TV projects (apparently Burt Reynolds is a good kisser, for the record).

When she stood up from a bench she was singing on for part of the show, she worried her "box office" may be showing. She told us she was fine being tacky, and proceeded to explain about the town trollop she resembled her "look" after. "I'm not a natural beauty," she said. Her minister grandpa worried about her looks too, she told us, and he would ask her if she wanted to go to hell and she'd reply: "No, but do I have to look like hell when I go there?"

But it wasn't all about the stories; throughout the evening she played a bevy of instruments from guitar to banjo, dulcimer, penny whistle and piano (all of which were spectacularly bedazzled, "I never leave a rhinestone unturned," she said). For a bit she even played the saxophone — betting the audience she could play the instrument backwards ... only to turn around and play with her back to the front. How she played anything with those long acrylic nails is a mystery, but she played everything well. Her three-piece band filled in the gaps, including filling in harmonies for the glorious songs Parton wrote for her trio with Emmylou Harris and Linda Ronstadt. 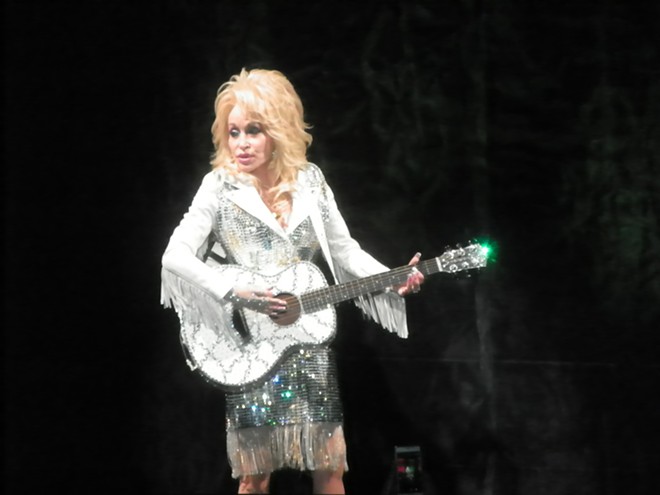 Dan Nailen
Guitar was just one of the instruments Parton played at her show Thursday night.

Surprisingly, there was a 20-minute intermission after she'd already been on stage for an hour and a half. She came back out, in a brand new shimmery black outfit, and expressed her gratitude for us all sticking around in the cold weather, and the chill was quite real. But the shorter second half included a lot more of the hits, she only played a couple of the new songs she wrote for her new album of love songs called Pure and Simple, which commemorates her 50th wedding anniversary.

What needs to be said is that Dolly, even though she said she was batting the sniffles and had to keep blowing her nose, has a voice that is unparalleled. You'd think she wouldn't be able to sweep up to some of those notes, but there she was going for the rafters with such ease. She held back a lot of the time, sure, but she brought the power when necessary. She told the audience this was her dream, it's all she ever wanted to do to sit and talk and sing with her fans.

Soon, she steamrolled into the glorious "Little Sparrow," the lively "Two Doors Down" and "Here We Go Again," her hit with Kenny Rogers "Islands in the Stream" and, of course "9 to 5," which got all of us working' girls up from our seats. Parton left for a mere second and came back out for her "encore" to sing the undeniable "I Will Always Love You." Nope, she's not Whitney Houston, she's Dolly Freaking Parton and it was her song first.

As she left for the final time, she told us all "now go and get warm!" 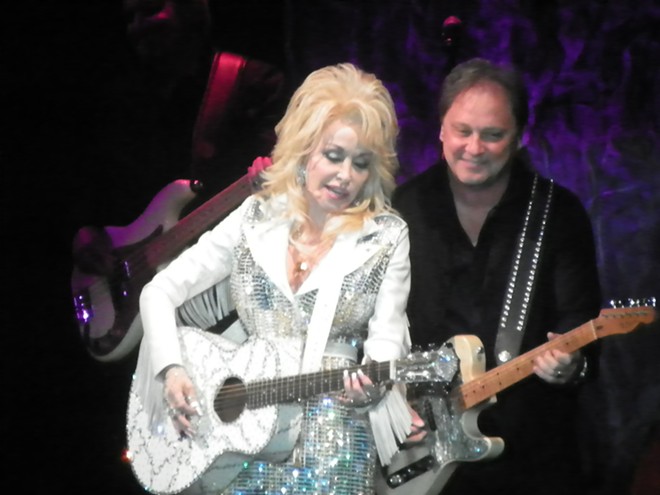 WSU police investigate graffiti with the N-word and "Trump 2016"