After brightening dozens of otherwise rundown, unused downtown storefronts with local art installations over the past few years, the creative vitality-focused nonprofit is reaching further with its next venture — placing emerging local businesses in un-leased, empty storefronts, allowing them to test their business models before making a big investment in a permanent location.

"It gives creative entrepreneurs an opportunity to test their idea with little risk, and that aspect really appealed to us because it builds infrastructure for young and creative people within the city to succeed," Window Dressing co-founder Ginger Ewing told the Inlander back in July.

It's a win-win for both parties, including the downtown property owners agreeing to let program participants use their spaces at little to no cost, for at least six months, or until a permanent paying tenant signs a new lease.

A selection panel recently reviewed applications from local entrepreneurs interested in joining the Creative Enterprise program's first cohort, and 14 startups were selected. Before they're able to move into an available space (which may take time to find, as Ewing says careful consideration will be taken to place each business in an appropriate location) the business' owners will take a month-long business development course offered by Spokane Community Colleges to prepare for the move from the basement —where such ideas often start out — to street-level.

Read more about the Creative Enterprise program, including its benefits on the local economy and what inspired its creation, in this Inlander blog published when the program first sought participants. 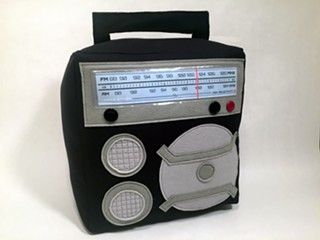 Spokanerrific | A retail shop that would sell locally-made art, crafts, designs and more, owned by Lulu Weiland, who currently produces a local blog highlighting the art, people, places and culture of Spokane. The Inlander featured her earlier this year in a story about another creative local project she's involved in, Spokane Artist Trading Cards.

Anemone Paper Florist | The familiar Spokane-based paper florist Mary Eberle is teaming up with Window Dressing to develop a new business plan, but won't be placed in a storefront.

Searchlight Hard Cider | Spokane couple Matt and Brooklyn Gibson currently brew craft cider at home, and want to expand their operations to introduce their locally sourced cider to the region's growing craft cider scene. (Note that the website link will not work until the Sunday after this post.)

F-Stop | A photography studio and gallery by established Spokane artists and photographers Bill and Kathy Kostelec. 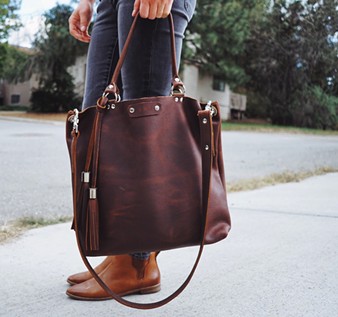 hustleandhideco.com
Teddi Cripps makes this tote bag and many other designs at her home studio.
Hustle & Hide Co. | The fast-growing venture of Teddi Cripps, who produces handmade leather goods in her Spokane home studio. Cripps currently sells her popular wares online and at local artisan markets, like Bazaar.

Art Salvage Spokane | Founded by Katie Patterson Larson two years ago, this local nonprofit collects, organizes and redistributes unused/unwanted materials and supplies that can be used to create arts and craft projects. Art Salvage has resold these goods at ultra-low prices through pop-up shops and at a space at Madelia Mercantile for the past year or so, but is now looking for a home of its own.

MattSlote Video Productions | A studio for the Spokane-based videographer and editor Matt Slotemaker, who produces interview, travel and documentary projects.