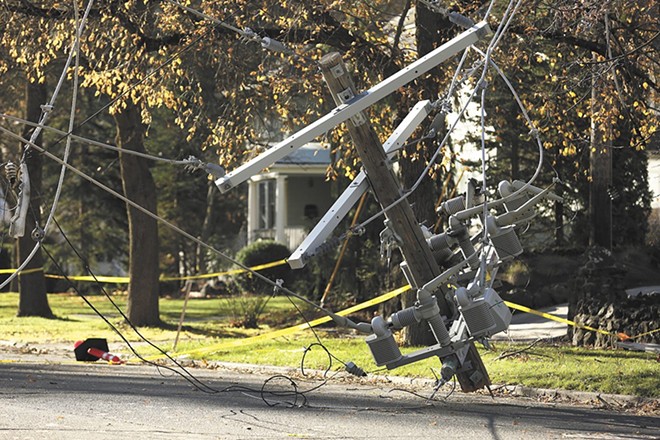 • You a cat person or a dog person? Either way, vote in the Pawlitics poll put together by the Spokane Humane Society — and drop 'em a few bucks to support their efforts in saving cute and cuddly animals.

• Learn why dog's smell so much better than humans, among other interesting tidbits, in this week's InHealth blog.

• Tonight on Dateline NBC, they delve into the South Hill murder-for-hire case of James Henrikson. See a preview of the episode here.

Batten down the hatches
Yes, it's going to be windy today. No, it's not going to be a repeat of last year's Windpocalypse. We hope. (KXLY)

Lonely
The Spokesman-Review reports on the fact the Spokane Fire Department has only hired one woman in the last 18 years. That is...not many.

Found
A Kootenai County hunter last seen on Monday was found dead at the bottom of a ravine near Bernard Peak. (KREM)

Should I Stay Or Should I Go
Big GOP donors are the latest group to have to decide whether to stick by beleagured presidential candidate Donald Trump. (New York Times)

Seriously dude?
Fox Business anchor Lou Dobbs tweeted out the phone number and address of one of the women accusing Trump of inappropriate behavior. What a cool guy! (Washington Post)

Wikihack
The Clinton campaign, in the meantime, finds itself the target of angry religious leaders over some comments about Catholics found in the campaign emails leaked by Wikileaks. (CNN)

I Love LA
The Los Angeles Dodgers took out the Washington Nationals in the deciding game of their playoff series, setting up a National League showdown with the Chicago Cubs. Tonight, the American League championship series kicks off with the Cleveland Indians and Toronto Bluejays. (ESPN)