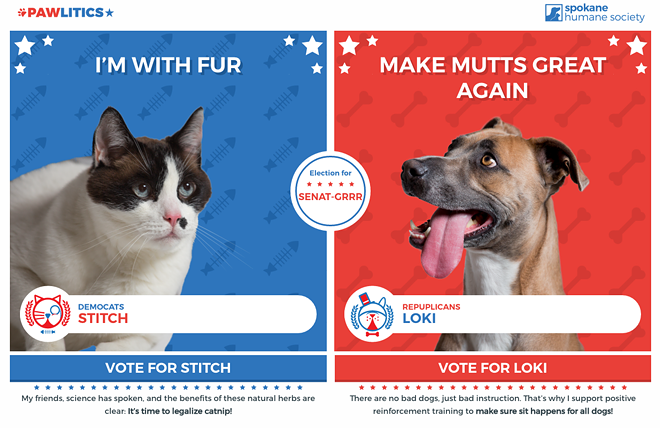 Cat person or dog person? Every vote for your species counts!
Put aside your differences regarding the two-legged candidates running for presidential office this election cycle. The real question is at hand: Are you for the Democats, or the Repuplicans?

For its newest fundraising and community awareness campaign, the nonprofit Spokane Humane Society is asking the community to cast their votes for the four-legged species of their preference. (Full disclosure: I volunteer there on a semi-regular basis to snuggle and socialize cats; and my adorable floofy cat Dellie is an SHS alumna... which means you also might guess which party I'm for here).

The main goal of the campaign — launched earlier this week at Pawlitics.net — is to get the public to interact with the shelter in a fun way, while learning more about its mission and the need for financial support to carry out that mission. Another angle of the program is to emphasize responsible pet-ownership behaviors, which in turn helps lower the number of animals in shelters.

"This political, two-legged campaign is not something anyone is excited about, so in an attempt to grab onto some of the fever that's been boiling over, we thought this would be a nice way to have a laugh and take a break," says Jenna Carroll, Spokane Humane Society outreach and volunteer coordinator.

On Pawlitics.net, users can vote for their favorite Democat or Repuplican party candidate vying for positions like "Senat-grr" (this week's featured race) and "Secretary of Plate" (one of the races to come).

The shelter pets running for office were nominated by their parties not just for their strong track records, but also because they're some of the shelter's harder-to-place animals, like this week's Democat candidate, 13-year-old kitty Stitch, and the Repuplicans' Loki, a super high-energy dog.

As with any election, pet party candidates are running on key issue platforms, like legalizing catnip and increasing the use of positive-reinforcement dog training. While these stand as fun themes for the canine and feline party representatives, these platforms are also important tenets of responsible pet ownership.

So how does the Pawlitics campaign work? The public can cast daily votes for their favorite candidate (as of this writing Loki was at 53 percent of the vote, while Stitch the Democat was at 47 percent), and then share their vote on Facebook or Twitter, thereby earning them another vote for that candidate. Additionally, each $5 donated earns voters another vote for their candidate (good thing real elections don't work that way... right?).

Campaign ethics are tossed out here; every $5 donation earns you another vote for your paw-ty!
For those who are super-passionate about their pet party, Spokane Humane Society is also selling limited edition T-shirts ($15) for each, bearing their respective slogans: "I'm With Fur" and "Make Mutts Great Again." The shirts are available in limited quantities at the shelter (6607 N. Havana).

And while (obviously) the DemoCATS and RePUPlicans are wordplays off the actual two-party structure, Carroll says in no way is the shelter advocating through the program for either Hillary Clinton or Donald Trump. As a registered nonprofit, the organization cannot engage in political campaign activity.

"We're just sending it out there and spreading joy and laughter and raising awareness of what we do," she says.

On the Monday night (Nov. 7) before our human election night, a winning party will be officially announced — the campaign will then culminate with adoption specials offered on the winning party of cats or dogs.

So what party — or rather, paw-ty — are you supporting? Head to Pawlitics.net and cast your vote to support local pets in need.

Your dog's nose knows, docs vs. apps and trivia for a good cause