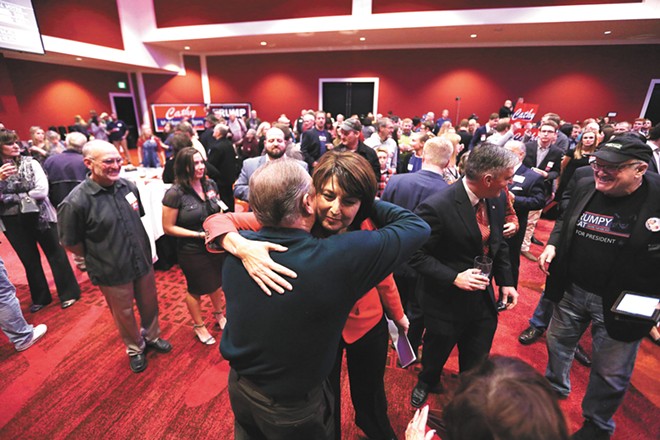 Her Democratic challenger, Joe Pakootas, hoped to seize on the contentious presidential campaign and McMorris Rodgers’ share of the August primary vote, 42 percent — the lowest since she was first elected a dozen years ago. Pakootas was the challenger in the 2014 election as well, receiving 39 percent of the vote.

Since she was first elected in 2004, McMorris Rodgers, the fourth-highest ranking House Republican, has maintained a firm grip on the 5th District seat, all but once winning re-election with more than 60 percent of the vote. Throughout this year’s primary and leading up to this week’s election, Pakootas criticized McMorris Rodgers for her support of GOP presidential nominee Donald Trump, especially in light of his references to grabbing and kissing women without their permission.

Although McMorris Rodgers denounced Trump’s statements and abuse of women, she stopped short of pulling her endorsement for her party’s nominee.

Many national and local political commentators had speculated on whether Trump’s racist, sexist and otherwise ignorant comments — not to mention his flat-out lies — would have an impact on the party.

Initial numbers indicate that McMorris Rodgers, bolstered by more than $2 million in contributions (compared to about $300,000 for Pakootas), won about 58 percent of the vote, a little under her previous showing against Pakootas. But that’s about what local conservative activist Kelly Lotze expected.

“Since the primary to today, she has been one of the only elected officials who has adamantly stuck by Trump,” says Lotze. “I think she’s earned more support from middle-ground Republicans because she’s maintained that support.”

McMorris Rodgers is not one to rock the boat. Since 2004, when she succeeded George Nethercutt, the Salem, Oregon, native has reliably voted along party lines.

She’s supported GOP policies on abortion, government spending and health care, including numerous votes to repeal the Affordable Care Act. As the chair of the House Republican Conference, she was at the center of the partial government shutdown in 2013. She and 86 other GOP lawmakers voted to end the shutdown 16 days later, and her role in the gridlock was a talking point for Pakootas this election.

In addition to his criticism of McMorris Rodgers’ endorsement of Trump, throughout his campaign Pakootas called her out as part of the Republican leadership in Congress that has worked to obstruct President Barack Obama’s policies.

“It’s the least effective Congress in history,” Pakootas told the Inlander ahead of this year’s primary election. “It’s not good leadership.”

Despite her role in a historically unproductive Congress, McMorris Rodgers has had success. Over the past four years, three bills she’s either sponsored or co-sponsored have been signed into law, including the Steve Gleason Act. Named for the former Washington State University and NFL player who suffers from a degenerative muscle disease, the law allows Medicare to cover the costs of devices that generate speech through eye movements.

McMorris Rodgers also has been a vocal proponent of shrinking government spending. This September, she and Tim Phillips, president of Americans for Prosperity, wrote an op-ed in the Washington Post in support of her Unauthorized Spending Accountability Act that she says will bring accountability to government spending. McMorris Rodgers writes that the bill would give the House of Representatives more control over “zombie” programs that continue to get taxpayer money after they’ve expired. According to the Congressional Budget Office, $310 billion will go to these programs in 2016.

“More and more people feel like their voices are not being reflected in their government,” she says in a statement. “We’re a government of the people, by the people and for the people. We must go back to some constitutional and ensure that people’s voice is reflected.”

Pakootas criticized the bill, saying it could potentially cut funding to necessary programs such as the Affordable Care Act and the Federal Election Commission, which oversees campaign funding.

For Dave Wilson, who ran as an independent in the 5th District primary this year, knocking off the incumbent Republican is a long shot, if not impossible.

“Our continued leadership will make sure the gov’t is accountable and transparent to you,” McMorris Rodgers tweeted shortly after initial results were released. “So you have a say in what happens.”