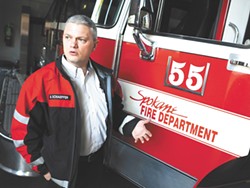 • MUSIC: Sister act Dry and Dusty went on tour, learned a lot about themselves and are now back in Spokane. So see them this Saturday.

• CULTURE: How to train a puppy to guide the blind — one local teen will tell you.

• Sick and Tired: The Spokane City Council is scheduled to decide Monday how to reconcile the city's paid sick leave law after the passage of a statewide initiative with similar policies. Both the city law and the initiative require certain businesses to provide paid time off for illnesses. (Spokesman-Review)

• Puff Puff Passed: California, Massachusetts and Nevada legalized recreational weed this week, adding to the list of four states and the District of Columbia with laws already on the books. A measure to legalize in Arizona failed, and as of this morning the final word in Maine is still out, but the "Yes" vote is in the lead. North Dakota, Florida and Arkansas also passed medical marijuana ballot initiatives. (Washington Post, New York Times, Business Insider)

• 'Not My President': Thousands gathered across the country to protest Tuesday night's election results. Protesters in Seattle, Portland, New York, Boston, Chicago, Dallas, Oakland and elsewhere took to the streets to express their outrage over the country's new leader. Also, five people were shot in downtown Seattle last night. Police say the shootings were unrelated to protests. (Seattle Times)

• 'An American Tragedy': New Yorker editor David Remnick (and a little George Orwell) on the power of public opinion and what appears to be the ultimate test of "the strength, or the fragility, of American institutions."

"Trump was not elected on a platform of decency, fairness, moderation, compromise, and the rule of law," Remnick writes, "he was elected, in the main, on a platform of resentment. Fascism is not our future — it cannot be; we cannot allow it to be so — but this is surely the way fascism can begin." (New Yorker)

• 'Her Loss': And if you haven't read Lindy West's essay about the election, do it now. (New York Times)