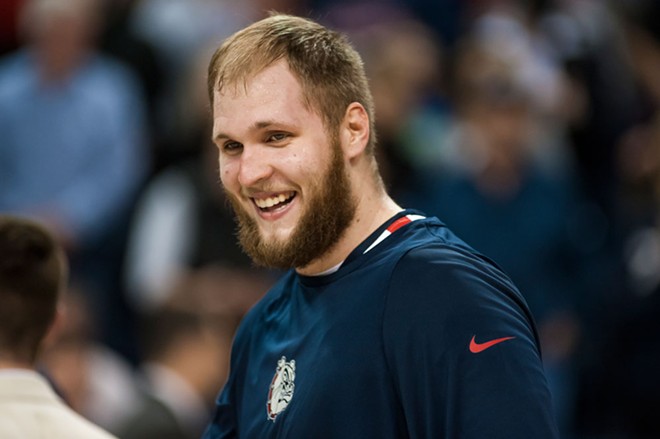 Gonzaga big man Przemek Karnowski has good reason to smile. The Zags at the No. 1 seed of the West Coast Conference tournament starting Friday in Las Vegas.
Gonzaga’s loss to BYU in the regular season finale is overshadowing a whole season’s worth of work. And that work adds up to the Zags not needing much luck over the next few days in Vegas.

The West Coast Conference Tournament tips off Friday at Orleans Arena. Gonzaga, by virtue of a first place finish in the regular season, is the one seed. That puts the Zags on the easy half of the 10-team bracket and keeps a clash with arch rival Saint Mary’s, or more recent nemesis BYU, on hold until Tuesday’s championship game.

First, though, Gonzaga will have to take down either nine-seed Pacific or eight-seed Pepperdine. That first Zags game, televised on ESPN2, is slated for Saturday at 7 p.m.

In four meetings with those teams this season the Zags won by an average of 29.5 points, and no game was closer than 20. A win Gonzaga will advance them to face either four-seed Santa Clara or five-seed San Francisco on Monday evening.

While luck wasn’t the driving force behind Gonzaga’s 17-1 conference record, the Zags did get lucky with this bracket.

Two-seed Saint Mary’s is on course to meet three-seed BYU in the semifinals. Saint Mary’s easily handled the Cougars in both meetings this season, winning each by 13 points. Gonzaga, on the other hand, can point to its games against BYU as their two toughest of 2017. But against Saint Mary’s, Gonzaga’s been much more dominant. Odds are we’re in for a second straight Zags vs. Gaels tournament championship game.

Not that it matters, really.

Unlike in years past neither Gonzaga nor Saint Mary’s need to win the tournament, and thus the league’s automatic berth to the NCAA Tournament. Both teams have spent the entire season ranked in the AP Top 25 and are locks to be dancing on Selection Sunday.

Orleans Arena, part of an off-the-strip locals’ casino, is a place where the Zags have felt very much at home over the years. Largely pro-Zag crowds have watched their team cut down the nets each of the past four seasons. A fifth straight tournament title, for a team that has won 29 games this season, is just three wins away.

Dogs might be closer to human than we realized; plus, garden prep and Kids at Heart