• NEWS: After Washington legalized weed, opponents feared rates of teens smoking it would skyrocket. A new survey found that pot use among Washington teens has stayed the same statewide, and actually declined in Spokane.

• MUSIC: STRFKR recorded its latest album isolated in a hilltop rental house near Joshua Tree National Park. Perhaps the "poppiest" album yet, the three-piece plays the Knitting Factory next week.

• BOOK: The late newspaperman Hill Williams' final book traces his lifetime covering the Pacific Northwest — an atomic bomb explosion, riding in submarines, walking in the crater of Mount St. Helens — and the lessons he learned.

• Strike Two
President Donald Trump's second travel ban — a revised version of the one halted by a federal judge in Seattle — was also blocked. By two other federal judges. Orders by judges in Hawaii and Maryland stop the revised ban nationwide. (New York Times) 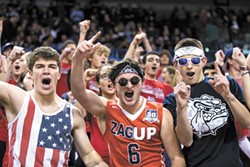 The widow of slain Coeur d'Alene Police Sgt. Greg Moore says Obamacare was the reason she could stay home with her daughter in the aftermath of Moore's death. In an open letter to Idaho lawmakers, she urges them not to repeal the Affordable Care Act without a "comparable replacement." (Spokesman Review)

• Mad March
That tournament that everyone's been talking about? The basketball one. It starts today. Click here for the schedule. Click here to print a bracket. Now you better hope the Zags win, otherwise Spokane is in serious trouble.

After legalization, Spokane teen pot use lowest it's been in at least a decade