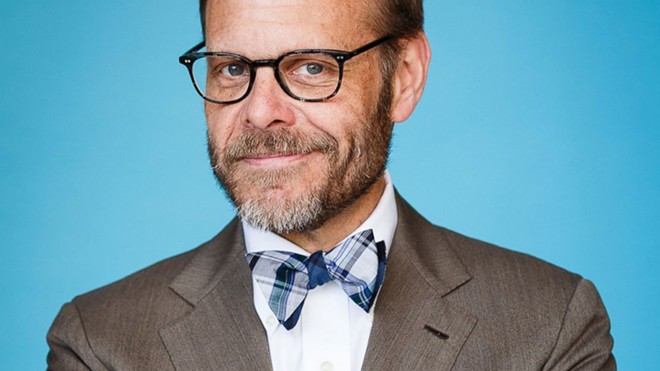 Alton Brown plays with his food Wednesday at the INB.
There are plenty of ways to have a great ol' time and put an end to March, so peruse our event listings and staff picks and get out there! Here's a little cheat sheet, a breakdown of some of the highlights of the week ahead:

LIVE BANDS | Some stellar rock at The Observatory to start your week, courtesy of Ice Cream, Heavy Seventeen and Balonely.

FILM | The New York Film Critics series continues with Salt & Fire, Werner Hertzog's look at a South American ecological disaster, screening at the Panida Theater in Sandpoint. Actor Michael Shannon will be part of the on-screen, post-show Q&A. Here's a look at the trailer:

WORDS | Prison writer Arthur Longworth uncovered life inside a Walla Walla prison in his book Zek: An American Prison Story, and two former inmates will read from the book at Auntie's, while Longworth joins the discussion via phone.

FOOD & DRINK | Alton Brown is back for another show at the INB. Alton Brown Live: Eat Your Science finds the TV personality and chef playing with food in incredibly interesting ways.

LIVE BANDS | Chateau Rive, one of Spokane's finest music venues, welcomes Davina & The Vagabonds, a band blending cool classic jazz with worthy originals for a hot night out. Here's a little sample of their sound:

COMEDY | He's a long-running favorite comedian, and an Emmy winner for his role on Baskets. And tonight, he's a headliner in Spokane, performing at the Bing — it's Louie Anderson!

LIVE MUSIC | The Coeur d'Alene Blues Festival kicks off. Find a story in the new issue of the Inlander coming out Thursday, and get on over to Idaho for some blues.

COMEDY | For one night only, the legendary Gilbert Gottfried hits Spokane for a gig at the Spokane Comedy Club.