Dan Nailen
Social Distortion got the packed Knitting Factory into a sweaty mess within a couple songs.

Social Distortion is one of those bands whose fans can genuinely count on to deliver what they know and love every time the group records new songs or hits a concert stage. And what they deliver is a winning blend of punk attitude and retro-rock riffage.

The audience? Predominantly hot-rodders and bikers, old punks and Bettie Page fashionistas, although Social D had enough time in the major-label spotlight and on rock radio that plenty of decidedly un-punk souls join the mob to hear leader Mike Ness's raspy roll through hits like "Ball and Chain" and "Story of My Life."

"Mob" is a bit of an understatement for the crowd at the jam-packed Knitting Factory show on Saturday night. It was tough to find any room to move around, whether on the main floor, in the bar area or upstairs; it was wall-to-wall and instantly sweaty when Social Distortion took the stage and lit into the barreling "So Far Away" and "Bad Luck," a worthy one-two punch of a show opener that got the mob to at least move forward and break into a pit in front of the stage.

A few songs in, after watching the, um, aggressive reaction to the band's tunes in that pit, Ness implored the crowd to mellow out a little. "Let's all get out of here alive, okay?" he asked, grinning.

"Don't Drag Me Down" and "California (Hustle & Flow)" followed, and the energy never really flagged over the course of the set. Ness paused at times to thank the crowd and relish the enthusiasm of the room, musing on how Boise would ever compete at the band's next tour stop. Ness has toured for the better part of four decades; he knows how to flatter his crowd. 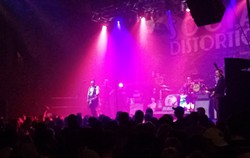 Dan Nailen
Social Distortion leader Mike Ness steps out front for a solo.
"Give Me the Sweet and Lowdown," from the band's 2011 album Hard Times and Nursery Rhymes, was a nice inclusion, but the mid-show version of "Ball and Chain" lagged a bit. The band slowed down arguably its biggest hit to let the audience sing along, and the result was more plodding than the undeniably rollicking original.

While all of Ness's songs make no bones about showing his countrified influences like Johnny Cash and Merle Haggard, he made sure the fans understood that when he introduced one song by calling it the sound of what happens when Orange County kids "write a hillbilly song," and that he considered himself a bit of a hillbilly, too. "I grew up listening to the Carter Family and other hillbilly artists," he said before launching into a strong version of "When She Begins."

By the time Ness and Co. finished off 90 minutes or so of consistently rocking songs spanning generations of rock fans, Social Distortion had offered plenty of proof that their sound remains timeless. Their fanbase clearly appreciates that, too, and they aren't going away any time soon, either.