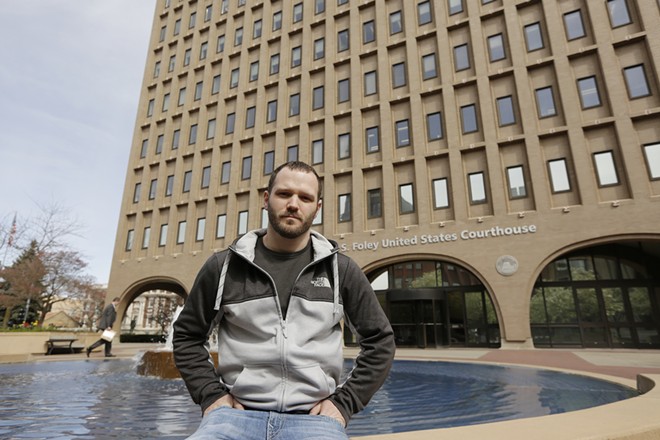 Young Kwak photo
Jerad Kynaston faces a potential mandatory life sentence for his involvement in a Spokane Valley grow operation six years ago. But have U.S. Attorneys withheld information that could prove his innocence?
The life that Jerad Kynaston has built for himself in the past five years — including his construction company, and their new puppy — could come crumbling down because of his involvement in a Spokane Valley marijuana grow operation.

In 2011, local and federal law enforcement raided the house where Kynaston, now 29, and at least seven other people were growing a bunch of weed. Police found more than 1,000 plants (though 677 of those "plants" were either empty or pots that contained "the root structure of suspected harvested marijuana plants") and one handgun.

All seven men were indicted in 2012 on violations of the Controlled Substances Act and, if found guilty, some are potentially facing mandatory 10-year sentences due to the amount marijuana that police found. Kynaston, who has two prior marijuana-related felony convictions, is facing a potential mandatory life sentence. He's also facing a firearms charge.

The case has languished in the system for the past five years. This week, it seemed that Kynaston was ready for it to end; he and at least two co-defendants were ready to plead guilty.

But less than 48 hours before the hearing at the Thomas S. Foley U.S. Courthouse in Spokane, the defense team stumbled on police reports written in March 2012 that had not previously been turned over to the defendants.

The reports, according to Assistant U.S. Attorney Patrick Cashman's statements in court yesterday, recount conversations among at least four of the defendants, the police and at least one federal prosecutor. Cashman described those defendants as "cooperators."

Defense attorneys say the 5-year-old reports contain information pointing to the men's innocence, but would not elaborate.

"I want the record to show, and everybody to understand, that this kind of unless there's a good reason, is not acceptable in this court and particularly in view of the nature of this case," said an indignant U.S. District Judge William F. Nielsen from the bench. "Hanging this guillotine over these people for all these years, whether they're guilty or not guilty, is not right."


The central is whether or not Kynaston and each of the co-defendants were growing medical marijuana, which has been legal in Washington state in some fashion since 1998.

The federal government cannot spend money prosecuting marijuana crimes in states where it is legal, according to what's known as the Rohrabacher-Farr amendment. A recent 9th U.S. Circuit Court of Appeals ruling affirmed that interpretation, as long as the medical grow complies with state law. The 9th Circuit decision consolidated 10 medical marijuana prosecution cases from California and Washington, including Kynaston's.

Those recently disclosed police reports could offer evidence that the men were in compliance with state law, federal defender Alison Guernsey told the judge. They could also indicate that the firearm linked to Kynaston actually belonged to someone else. 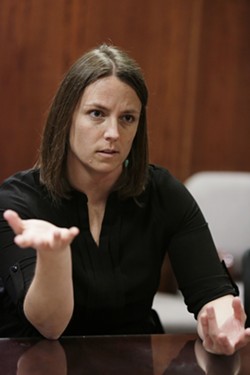 "[The reports] include statements that the firearm in this case with someone other than Mr. Kynaston," she said. "These reports also talk about the marijuana grow and the medical nature of that grow."

But beyond concerns over the content of the reports, Guernsey added, is federal prosecutors' unwillingness to hand them over. If not for a "fortuitous" conversation with another attorney representing a defendant who has already pleaded guilty in this case, she never would have known about the reports.

Then, when Guernsey contacted Assistant U.S. Attorneys Cashman and Timothy Ohms, both said they had no idea that the reports existed, but would "scrub the file," Guernsey told the judge. It was only after Guernsey prodded Cashman and Ohms again — less than two days before her client was ready to plead guilty — that they handed the reports over.

Finally, Guernsey points out that Assistant U.S. Attorney Russ Smoot was present for each of the interviews detailed in the police reports.

"I find it incredibly troubling, and perhaps indicative of a larger systemic problem at the U.S. Attorney's Office, that one attorney on a case is not keeping the other attorneys on that same case in the loop as to what discovery is available," she said. "It indicates there simply is no process by which we as defense counsel and the court as an arbiter can be entirely sure that we're ever going to get all the information to which we're entitled."

Cashman, the federal prosecutor, told Judge Nielsen that the reports did not contain any new information. He added that the reports detailed interviews with "cooperating" defendants who were speaking with the government under the agreement that the information would remain confidential unless the case went to trial.

"It's all about trust," Cashman said. "If the government simply were to engage in some type of interview with a cooperator, and then immediately turn around and disclose that to other counsel for other co-defendants, that would breach our agreement and our trust with the cooperator and then no one would be willing to come forward."

Judge Nielsen clarified that regardless of how the information was received, the government has an obligation to hand over all Brady material — any information that could point to a defendant's innocence.

"I just don't see any excuse for the long delay right on the eve of pleas about to be entered, potentially without the defense counsel having all the information it would be entitled to," Nielsen said. "It is of great concern."

The judge ordered the feds to review their entire case file to ensure that defendants have every piece of information to which they're entitled. Depending on what, if anything, turns up, the feds could face sanctions. Those could include monetary fines, suppression of evidence or even dismissal of the entire case.

Calls to the U.S. Attorney's Office seeking comment were not immediately returned. We'll update this post if we hear back.

After the hearing, Guernsey declined to elaborate on the specific content of the 2012 police reports and said she could not share them with the Inlander.

"We have no idea why it wasn't turned over," Guernsey said. "But it's our position that the information is material to whether Mr. Kynaston is guilty."

Why does the weather in Spokane keep disappointing us?