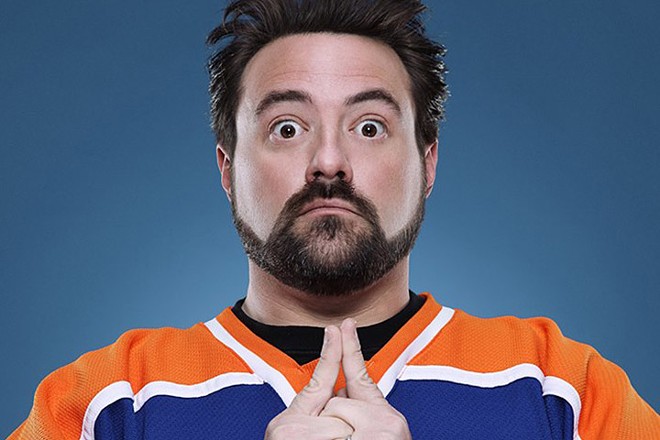 Kevin Smith is doing four shows at Spokane Comedy Club over Memorial Day weekend.
We're barreling towards Memorial Day weekend, and as of this writing, there's some sunshine ahead, too! You'll want to check out our event listings and Staff Picks for some awesome things to do in the Inland Northwest.

WORDS | This month's Spokane Poetry Slam at the Bartlett features special guest Stephen Meads, a veteran of the national and regional slam scene for more than a decade.

LIVE BANDS | Modest Mouse have been favorites among Northwest rock fans for decades, and they headline The Knit Tuesday. Read our editor's sort-of-fond memories of one experience with the band. Here's a taste:

WORDS | Drop by Spark Central to listen to stories read by Spokane Civic actors from the West Central Dial-A-Story project, one of the coolest events of the week for sure.

LIVE BANDS | I love the whole idea of "pastel punk," and that's what the Corner Girls promise for their show at Baby Bar, joined by Funeral Homies.

COMMUNITY | Here's some real news: The Northwest Alliance for Responsible Media is hosting a community discussion about "Fake News," the media and how to sort through it all at the Community Building at 5:30 pm. (Full disclosure; my partner is part of the Alliance).

WORDS | Literature lovers of all stripes will want to get to Auntie's for a powerhouse lineup of authors topped by J. Robert Lennon reading from his new book Broken River, and including locals Shawn Vestal and Leyna Krow.

WORDS | Fight Club (among many other books) author Chuck Palahniuk swings through Spokane for an event at the Davenport at 7 pm.

FARMERS MARKET | Hey, I just noticed the South Perry market is off and running for the season. Huzzah!

THEATER | The Civic's run of Kiss Me, Kate continues its run this weekend. Get into some Cole Porter with your bad self! And read our story about the production here.

FESTIVAL | It's opening day of Sasquatch! — to me, that really means it's LCD Soundsystem Day! Watch for the new issue on Thursday for a breakdown of this year's festival.

COMEDY | Writer/director/podcaster and all-around hilarious dude Kevin Smith has what you'd call a massive cult following ever since he hit with Clerks. He's on stage for a couple shows today and Saturday at the Spokane Comedy Club.

LIVE BANDS | T.I. is a pretty damn big get for the Knitting Factory and local hip-hop fans, and he'll be headlining on Saturday. Here's a little sample:


LIVE BANDS | This is one epic, cool show. The Accused A.D. is an Accused tribute band — that includes two member of the Accused! They'll play along with locals Cold-Blooded and Scatterbox at the Observatory.