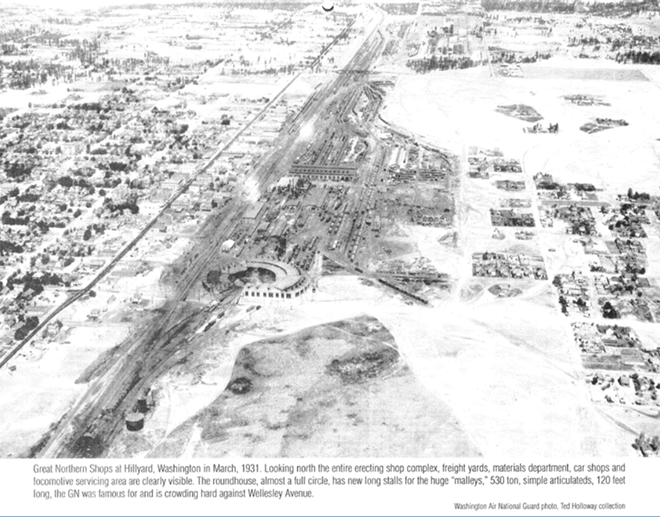 Washington Air National Guard photo, Ted Holloway collection
The future BNSF Railway Yard in March 1931.
Below a former BNSF Railway fueling station in Spokane, a plume of petroleum roughly the size of seven football fields rests on top of groundwater, according to the state Department of Ecology.

That groundwater is part of the Spokane Valley-Rathdrum Prairie Aquifer, which is the drinking source for about half a million people in Eastern Washington and North Idaho.

The Black Tank site in the Hillyard neighborhood was once occupied by, well, a big black tank, used to store heavy bunker fuel for train engines from about 1910 to 1988. Liquid asphalt and other chemicals were also stored on the site until the tank was removed in 2006 and contaminated soil was removed.

Although the contamination is sitting on the Hillyard Trough portion of the Rathdrum aquifer, Ecology says that the drinking water is safe.

"Because the contamination is a heavy oil, it is staying on top of groundwater with very little mixing occurring," Ecology says in a fact sheet about the cleanup. "Many groundwater monitoring wells are at the site, and we are confident that drinking water is not affected by the contamination at this time. Monitoring will continue until the cleanup process is complete."

BNSF, Marathon Oil Company (which operated the site and whose obligations are now performed by Husky Oil), and the Department of Ecology have an agreed order to clean up the site from 2012.

The site lies right in the path of the North Spokane Corridor, the north-south freeway that the Washington State Department of Transportation is building to connect Interstate 90 to U.S. Highway 395.

WSDOT reported in March that it had worked out a framework agreement with BNSF and Husky Oil to make sure the state still has right-of-way access to the site, can continue designing and building the freeway, and that the "cleanup infrastructure can co-exist with the freeway."

The first phase of the process that will decide how to clean up the site is now up for comment. The parties have created a draft that details a few cleanup options in a report known as a Remedial Investigation and Feasibility Study.

There are basically five ways to deal with the problem, according to the report, which was prepared by contractors for the companies that will foot the bill:
Noted in a fact sheet compiled by the state: "While Ecology doesn't fully support some of the conclusions in the RI/FS, it meets Washington’s cleanup law and provides the information we need to develop a draft cleanup action plan with your input."

People can comment on details of the report and cleanup plans through June 22, and details can be found at Ecology's website. Comments can be sent to:
Jeremy Schmidt, jeremy.schmidt@ecy.wa.gov 4601 N. Monroe St., Spokane, WA 99205, or through an online form. If 10 people request a public meeting, Ecology will hold one. If, after reviewing the comments, no changes are made, the report becomes final.