Possible charges for reserve deputy who shot and killed his wife, Comey could testify before Senate, and morning headlines

NEWS: In this polarized political climate, Christian schools like Whitworth University try to strike a balance.

MUSIC: Festival season is in full swing (or rock or jazz or blues, if you like) and this weekend, about 100 bands will descend on downtown Spokane for the Inlander's annual Volume Music Festival. We've complied several playlists to get you amped.

SCHOOL IS COOL: It's time for our annual Scholastic Fantastic issue, where we highlight several interesting, groundbreaking and otherwise awesome pieces of research at surrounding universities. Read about an influential Native woman, gut bacteria, the rise of antibiotic resistance, glaciers and the pressure some college students feel to get married.

After nearly a year and a half, the Spokane County Sheriff's Office is recommending manslaughter charges for the Lincoln County reserve deputy who shot and killed his wife. Dwayne Thurman told police in January 2016 that he was cleaning his wife's gun when it accidentally discharged, striking Brenda Thurman in the chest, killing her. (Spokesman-Review)

A man reportedly spewing racial slurs and "war whoops" when he ran over a 20-year-old father of two and his 19-year-old friend at a Grays Harbor County campground has been charged with manslaughter, vehicular assault and hit-and-run. (Seattle Times) 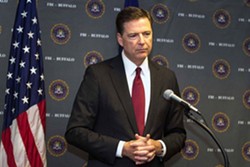 Former FBI Director James Comey could testify before the Senate next week.
downtown Spokane on Tuesday night, though one man was detained. (KHQ)

Former FBI Director James Comey could testify before the Senate next week about his conversations with President Trump. Comey has said that Trump encouraged him to drop the FBI's probe into former national security advisor Michael Flynn. (New York Times).  Also, the House intelligence committee is issuing subpoenas for Flynn and Trump lawyer Michael Cohen as part of its investigation into Russian meddling in last year's election. (Associated Press)

VOLUME cheat sheet: A Spotify playlist of some artists playing The Observatory

OK Go, who play Spokane this summer, discuss how they come up with those crazy music videos in TED Talk