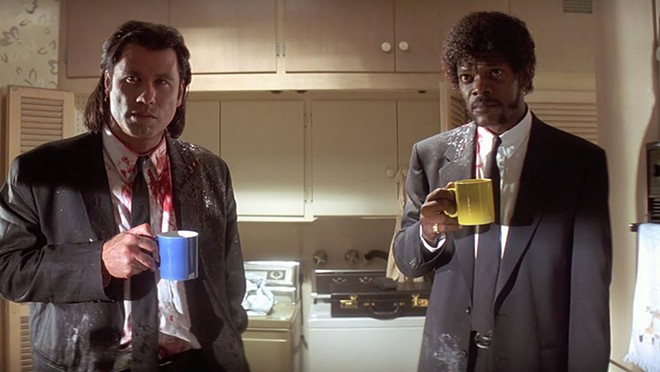 Pulp Fiction is back on the big screen this week at the Garland Theater.
Monday, June 26
COMMUNITY | Join the Witnesses for the Climate, a gathering of experts on climate change in town to testify on behalf of the Spokane Climate Protectors, as they gather for a talk at the Community Building.

FILM | The Garland Theater's Summer Camp continues with the utter awesomeness that is Pulp Fiction.

Wednesday, June 28
COMMUNITY | Join Spokane Poet Laureate Laura Read for a workshop that will help you illustrate your vision of Spokane through photos and words at the Snapshot Spokane Workshop.

MUSIC | How would you like to have your mind melted? Guitar Wolf can take care of that for you. The Japanese garage rockers play The Big Dipper tonight. Here's our story about the band, and here's a music sample:

Thursday, June 29
THEATER | The Phantom of the Opera continues its run at the INB tonight and through the weekend. Read our story about the dramatic reimagining of the Broadway classic.

Saturday, July 1
FESTIVAL | It's the first-ever Coeur d'Alene Brew Fest, going down downtown in the city by the lake. More than 30 breweries, food trucks and live tunes await.