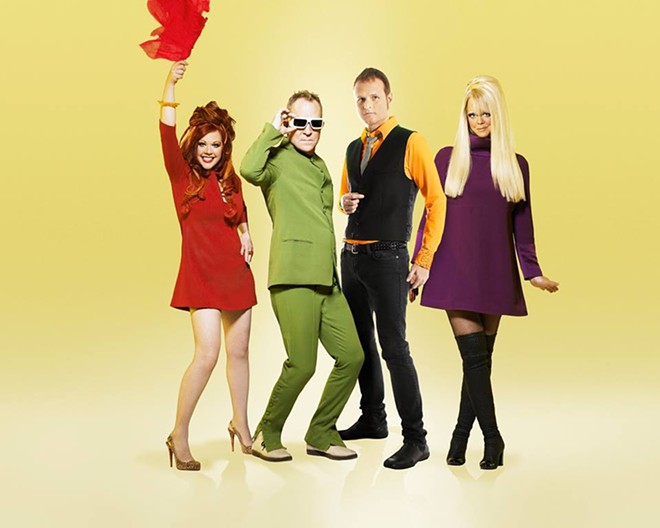 The B-52s headline Friday at the Festival at Sandpoint.
Heading toward the dog days of summer, be sure to take advantage of every entertainment opportunity you can by perusing our event listings and Staff Picks. Here are some highlights of the week ahead:

FOOD & DRINK | The Gilded Unicorn is hosting a special six-course Firestone Walker Beer Dinner, which sounds like a lovely way to start a week.

FILM | If you dug the epic Grateful Dead documentary currently streaming on Amazon, or you just like the band, head to a Regal Cinemas nearby for the Grateful Dead Meet-Up at the Movies 2017 for a screening of a 1989 show to celebrate what would have been Jerry Garcia's 75th birthday.

MUSIC | Seattle metal dudes Wounded Giant have a stellar new album and a sludge-rock sound that's endlessly appealing. Read our interview with the band here, and give this tune a spin:


MUSIC | If you prefer country-folk-blues stylings over metal, it's hard to do better than James McMurtry, who is playing the Bartlett tonight.

FESTIVAL | World-bea- friendly jazz cats Pink Martini kick off this year's Festival at Sandpoint in — you guessed it — Sandpoint. Here's a little sample:

DRINK | The Spokane Brewers Festival kicks off its second year tonight at the Spokane Arena. Great tunes, multitudes of beers; what more could you want?

FESTIVAL | The always-amazing B-52s are the headliner at Festival at Sandpoint tonight, so dance your mess over to Idaho for a guaranteed good time.

MUSIC | Local band Mini Murders celebrates the release of their new EP with a show at the Bartlett.

MUSIC | Over in Coeur d'Alene, another local album release, this one courtesy of Wayward West, who will be joined by Bullets or Balloons at Hogfish on East Sherman.

The contradictory and confusing process that is civil asset forfeiture in Sunnyside, Washington