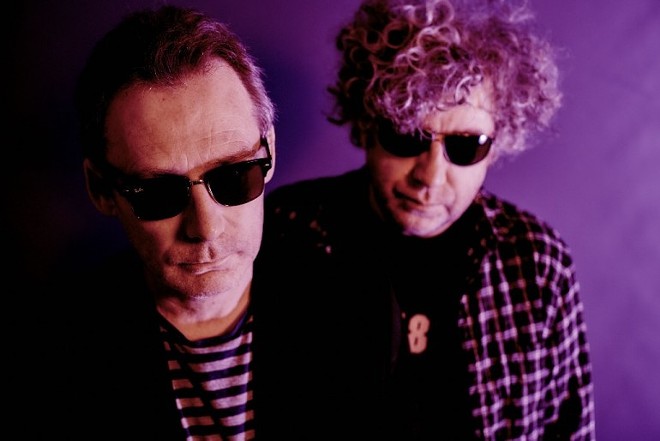 Jim (left) and William Reid of the Jesus and Mary Chain; they play the Bing on Oct. 26.
Scottish shoegaze legends the Jesus and Mary Chain are about to embark on an American tour, and one of the band's stops will be in Spokane on Oct. 26. The band is set to perform at the Bing, which has partnered with all-ages venue the Bartlett for the occasion.


The Jesus and Mary Chain was formed in 1983 by brothers Jim and William Reid, who gained notoriety for a sound that embraced both the abrasive noisiness of post-punk and the sunny pop melodies of 1960s girl groups.

They've been critical darlings since the release of their brilliant 1985 debut Psychocandy; its opening track, the Phil Spector-meets-Velvet Underground reverie "Just Like Honey," remains one of the most iconic songs of the mid-'80s art-rock movement. Rolling Stone later named Psychocandy one of the 500 greatest albums of all time; Pitchfork called it the 23rd best record of the '80s.

Following growing disharmony between the Reid brothers, the Jesus and Mary Chain disbanded in 1999, though they reunited in 2007 with a well-received set at Coachella (which included a cameo by Scarlett Johansson). They've been playing together ever since, and this year's Damage and Joy was the band's first new album in nearly 20 years.

Tickets for the Spokane show start at $37.50, and they're set to go on sale Friday at 10 am through the Bartlett's website.