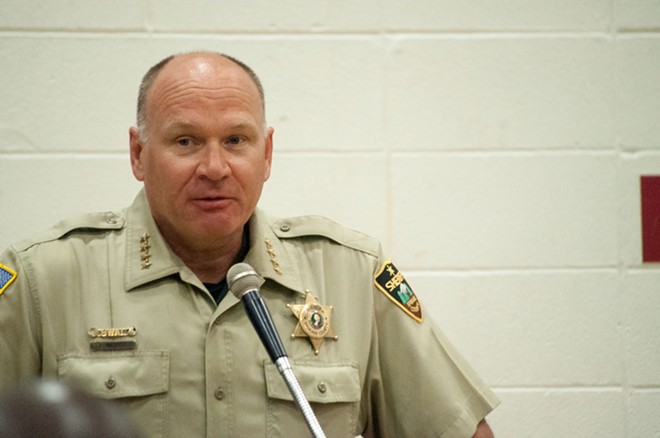 During a speech to graduates of the Head Start to the Construction Trades training program at the East Central Community Center on Thursday, he said that if he had a magic wand that could limit the government in one way, he'd choose to eliminate its ability to take away your drivers license for failing to pay tickets or fees.

Washington state has a long list of ways you can lose your license, many that have to do with reckless or inebriated driving. But you can also lose your driver's license for failing to appear in court, pay a traffic ticket or pay child support. (Even Seattle rap sensation Macklemore has had his license suspended because of an unpaid ticket.)

"Now, if you're out there getting DUIs and all that? I'm going to take your license away," Knezovich says. "If it's simply because you couldn't pay a fine? There's got to be a better way to get that money."

Many of the crowd of construction training graduates have had serious challenges in their lives, including long runs of unemployment, poverty, drug addiction, and criminal records. But Knezovich points out that the lack of a driver's license is a major barrier that many people have faced in trying to turn their lives around.

Michael Althauser, staff attorney with Columbia Legal Services, says there are currently around 300,000 people in the state of Washington who have their license suspended — a third more than the entire population of the city of Spokane. In fact, he says, prosecutors statewide estimate they spend about 25 percent of their time dealing with suspended licenses.

For a low-income person, he says, a driver's license and a car are particularly vital tools.

Losing your license can make it hard to get a job.

"The biggest impact I see is if people are applying for a job, there will be a question: 'Do you have access to reliable transportation?'" Althauser says.

If you're competing against someone who owns a car, but you can only ride the bus, a business is less likely to hire you.

And if you already have a job, losing your license can make it hard to keep it.

"It’s hard to have a job where you might not have predictable hours," Althauser says. "You work at a restaurant and it closes at 10 pm, and the bus may not run that time. I had a client, that was her situation. She needed to use the car, she was working at a restaurant and it was not on a bus line. She didn't have the way to get home reliably."

Not ssurprisingly, a lot of people just choose to drive with their license suspended anyway. But as Althauser points out, if you can't afford to pay your fees you're unlikely to be able to pay for your license tabs. So you're more likely to be pulled over. And if you're driving on a suspended license, that's another enough hefty fine.

In 2013, the Inlander highlighted efforts to argue that such license suspensions were unconstitutional. But the practice has continued in Washington, leaving local advocates and governments to establish relicensing programs.

"Sometimes they come to us," Spencer says. "We pull their tickets out of collections and get them on a [payment plan] time frame that is reasonable. Once we get them on a time frame, they are eligible to get a driver's license."

But it's not always that easy. Althauser points out that traffic ticket payment-plan policies differ from county to county, sometimes saddling debtors with a confusing thicket of different payments required on different days of the month. And if they miss one? Then they lose their license again, and have difficulty getting a new payment plan.

The state legislature has slowly made efforts to address this issue. Althauser says Spokane Valley state Sen. Michael Padden will be holding a work session on Sept. 13, as a work group takes an in-depth look at the license suspension problem.

A bill co-sponsored by Spokane state Rep. Marcus Riccelli this year, which would have required at least two outstanding traffic violations before a license is suspended for nonpayment, passed the state house overwhelmingly but never made it through committee in the Senate.

For now, Knezovich stresses how many problems the current policy causes for people struggling to get out of poverty.

"You can't break that cycle," Knezovich said in his speech. "You get in a spiral, and the next thing you know, you're never getting out."