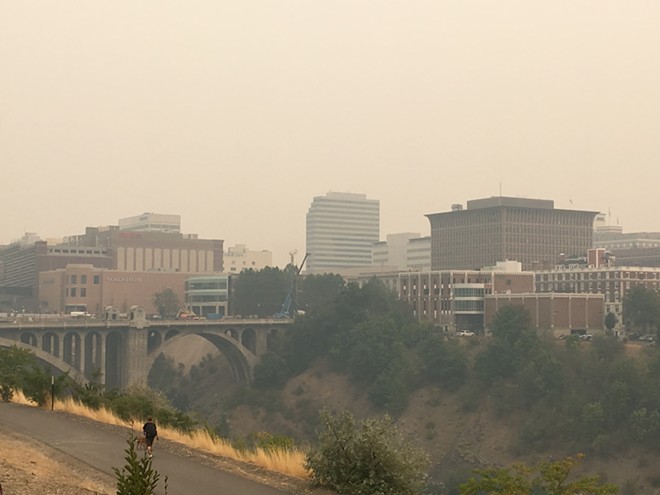 Samantha Wohlfeil photo
Smoke in Spokane is at "very unhealthy" levels today, which means that everyone could see impacts on their health if they go outside.
House of Charity and Open Doors are open 24 hours a day for people experiencing homelessness, especially during inclement weather, which includes smoke.

The amount of wildfire smoke in Spokane moved into the "hazardous" range Monday, and remained in the "very unhealthy" range all day Tuesday, according to the Spokane Clean Air agency. As of Tuesday afternoon, the level was about 246 on a 0 to 500 scale that measures pollutants in the air.

That means it's unhealthy for everyone to be outside, with the entire population likely to be affected by smoke, which can damage lungs, make it harder to breathe, and exacerbate health problems.

House of Charity, at Browne Street and West Pacific Avenue, was encouraging people who might usually hang around outside to come inside Tuesday.

"I was super annoyed at the smoke, and I have a nice home with insulation and cleanish air to breathe," says Sam Dompier, HOC director. "If we can imagine the impact we are all experiencing, and we have homes and cars, it's important to remember to have compassion on people that don't have the resources to not be in the smoke."

As usual, HOC is open for single men and women 18 and older. There is space for approximately 243 people to sleep there, and so far no one has been turned away who wants to rest there, even after the mats are all full, Dompier says.

"Especially in inclement weather, we’re not going to be turning people away," she says.

Open Doors family shelter has seen more people hanging out during the day since Monday, and had more new faces walk in the door, says director Joe Ader.

"We had five new families come in today," Ader says.

They usually have one or two new families a day, so that's more than double what they usually see at the shelter, located at the end of South Richard Allen Court.

"And we also have quite a few people just in the shelter during the daytime which normally would be out looking for housing and jobs with other agencies," Ader says. "We don’t really have to encourage people to come in, it’s pretty bad out there, they’re coming inside anyway. It gets a little exciting with all the kids inside. We’re used to it, but the smoke is definitely not a good thing."

The forecast is for smoke to remain at very unhealthy or hazardous levels through at least Wednesday, with hazy skies and hot temperatures through the week, according to the Environmental Protection Agency.

WSU and other Washington colleges and universities declare support for DACA