What we lost when we lost Tom Petty: An American classic 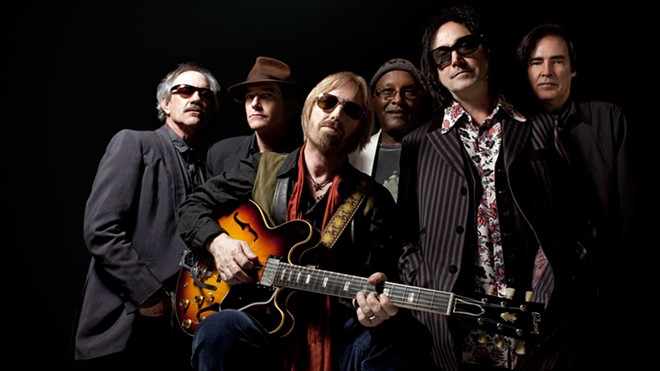 Warner Bros. Mary Ellen Matthews image
Tom Petty and the Heartbreakers
Even growing up in the '80s and '90s with the omnipresence of Tom Petty's music on the radio and MTV, I never became a true fan until I saw Petty and his band the Heartbreakers live, on stage, showcasing an almost extrasensory connection between musicians who were also lifelong friends.

The first time was in 2002 in a Utah hockey arena. And the last time was 10 days ago at the Hollywood Bowl, in what would turn out to be the second-to-last show of his life. Petty, as you undoubtedly now know, died Monday in Los Angeles.

Petty and his band had the ability to turn seemingly simple songs into something altogether more thrilling. His tales of hard-luck rebels and never-give-up strivers, as well as darker songs of struggle and romantic pain, had the kind of universal appeal that it's easy now — in retrospect — to understand how at different points of his career, Petty was considered a punk rocker, a pop star, a hard rocker and, ultimately, an American classic.

The 2002 show when I first saw Petty came as the band toured behind one of their more forgettable albums, The Last DJ — essentially a anti-corporate-radio tantrum set to music. And while none of the songs from that record stuck with me, seeing them performed live along with undeniable hits from the Petty canon ("Free Fallin'," "A Woman in Love (It's Not Me)," "Refugee") turned me into a late-in-life Petty fanatic. Like, seriously obsessive.

I bought up his early albums I'd dismissed when I was a young punk-turned-indie-rock snob. And I was always sure to quickly pick up new Petty releases as they arrived, like 2006's Highway Companion and 2014's Hypnotic Eye — what is now going to forever be the last album by Tom Petty and the Heartbreakers, and the first that ever went to No. 1 on the charts. I watched director Peter Bogdanovich's excellent four-hour Petty documentary on Netflix, and relished hearing Petty's hilariously deliver lines as "Lucky," the good-hearted redneck on Mike Judge's King of the Hill.

What I never got to do, until last week, was see the band in concert again until a fortuitous phone call with a friend in Southern California, in which he told me he had tickets for the Sept. 22 show at the Hollywood Bowl.

One of my summer goals in 2017 was catching a Tom Petty and the Heartbreakers show, and I knew I'd have to travel from Spokane to do it. The band was calling it a 40th anniversary tour (even though technically their first album came out in 1976), and Petty had told interviewers it was likely the band's last major road trip.

There was no Spokane date on the slate — they last played in the area at the Gorge in 2014; their last proper Spokane gig was in 2006 at Spokane Arena (complete with Stevie Nicks on hand!). The closest they came this summer was Safeco Field in Seattle, but I was off on a family vacation.

I naturally jumped at the chance offered by my buddy. A favorite band in a legendary venue with some of your best friends? Hard to beat.

Petty and the Heartbreakers lived up to my sky-high expectations at that Sept. 22 show, and then some. The sound at the Hollywood Bowl is incredible; even with 18,500 screaming people in attendance, you could hear individual notes ring out off lead guitarist Mike Campbell's Rickenbacker while Petty's rhythm parts gave the songs that Byrds-y jangle they were known for. Benmont Tench, simply one of the best pianists and keyboard players in rock, was amazing throughout. Petty was gracious and funny and energetic, thanking the audience for 40 years of success and telling stories about meeting Campbell and Tench as teenagers in Florida.

The Hollywood Bowl setlist touched on all aspects of his career, leaning a little heavier on his classic 1994 release Wildflowers than other albums, and opening and closing with tracks from his self-titled debut ("Rockin' Around (With You)" opened the show, "American Girl" ended the encore in a massive sing-along).

Petty will probably never be considered on the same level as some of the artists he worked with over the years, like the Beatles' George Harrison, Johnny Cash and Bob Dylan. But there's a reason those guys wanted to work with Petty, too. And he focused on straightforward American rock 'n' roll so much that his creativity as a songwriter won't be widely mourned like perhaps that of David Bowie or Prince. But it should be.

Petty seemed like more of an Everyman rock star than any of those folks, a guy whose roots in working-class Florida always showed, even after decades of L.A. life. They showed in his songs' characters and in his attitude of making every concert a celebration for both his fans and his band.

I feel lucky that I got to go to one last party.

Here's a Spotify playlist of the setlist from the Hollywood Bowl:

Got a great ghost story? We want to hear it