MUSIC: Dan Nailen, who was there for his second-to-last show Sept. 22 at the Hollywood Bowl, reflects on what we lost when we lost Tom Petty: An American classic.

ARTS & CULTURE: Got a great ghost story? We want to hear it.

NEWS: Democrats, in the minority in both houses of Congress, are lamenting their inability to pass restrictions on guns in the aftermath of Sunday night's mass shooting in Las Vegas that claimed at least 59 lives, including that of the gunman. (via New York Times)

The New York Times
A shrine to the victims of Sunday night's mass shooting in Las Vegas continues to grow amid new revelations about the crime.
The girlfriend of Las Vegas gunman Stephen Paddock returned to the U.S. from the Philippines and is expected to be questioned by authorities to find out what she knows about his preparations and motivations for the mass shooting. (New York Times)
• President Trump visits Las Vegas today in his role as "Consoler-in-Chief," a trip that will test his emotional depth — or lack thereof. (CNN)
• The definition of "fake news", debunked: False ISIS connections, nonexistent victims and other misinformation in the wake of the Las Vegas shooting. (New York Times)
• Fact-checking a fraudulent gun-safety chart and misleading data on spending by the National Rifle Association. (New York Times)
• It was unquestionably terrorizing, if not specifically the actions of a "terrorist," at least according to the president: What to call the Las Vegas shooting? (New York Times)
• Washington Gov. Jay Inslee called for a statewide ban on devices that enable semiautomatic rifles to fire faster and become fully automatic. (Spokesman-Review)

¡No comprende, Señor Trump!
The president's trip to Puerto Rico yesterday was a test of his ability to lead: He failed — hugely — writes CNN's Chris Cillizza.
• In an interview with Fox News last night, Trump vowed to "wipe out" Puerto Rico's $74 billion debt to Wall Street. The New York Times asks: Can he actually do that?
• There will be no U.S. bailout for Puerto Rico's debt, Mick Mulvaney, director of the White House budget office, asserted this morning in response to Trump's claims. (Bloomberg)

Fox, meet henhouse
Scott Pruitt, head of the Environmental Protection Agency, has spent the past several months meeting with top corporate executives and lobbyists from all the major economic sectors that he is charged to regulate, and almost no meetings with environmental groups or consumer or public health advocates, and has made frequent, government-funded trips to his home state of Oklahoma. (New York Times)
• After Pruitt met with industry officials, he made decisions that benefited those industries. (Washington Post)
• Pruitt's frequent flights at government expense have cost American taxpayers more than $58,000. (Washington Post)

Zinke under investigation
Interior Secretary Ryan Zinke is under investigation for his use of taxpayer-funded charter planes. Zinke — who dismissed the claims as "a little B.S." — is one of several Cabinet members to face questions over his expensive travel, along with former Health and Human Services Secretary Tom Price, who resigned Friday. (Slate, Politico)

Not on the same page
Defense Secretary James Mattis has openly split with President Trump on whether to uphold the U.S. nuclear deal with Iran, becoming the second member of the president's National Security Council to contradict him ahead of a decision regarding the deal. (New York Times)

Hypocrisy in the House
Tim Murphy, a longtime Republican congressman from Pennsylvania and a vocal opponent of abortion, asked a woman with whom he was having an affair to undergo an abortion, reports the New York Times.
• The Inland Northwest's two U.S. House members, Washington's Cathy McMorris Rodgers and Idaho's Raúl Labrador, voted for the "Pain-Capable Unborn Child Protection Act," a bill that would ban abortions more than 20 weeks after conception. (Spokane Public Radio)

Not-so-stiff upper lip
British Prime Minister Theresa May suffered through a cringe-inducing speech before members of the Conservative Party this morning, contending with a coughing fit, a prankster, and letters falling off the party's slogan on the wall behind her. (New York Times)

Early blizzard strikes Montana
Heavy snow — as much as 30 inches in some places — fell across Montana yesterday, knocking out power to tens of thousands of people. (The Weather Channel) 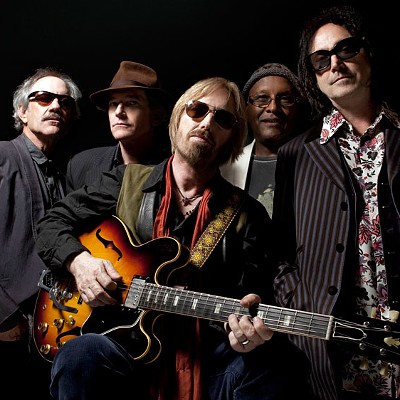 What we lost when we lost Tom Petty: An American classic

"The Truth Has Wings," and Inlander artists have a place for their sculpture at Terrain 10