Depending on where you're reading this from, today's lack of parking enforcement and U.S. Postal Service presence is either in recognition of a federal holiday celebrating someone dubiously credited with discovering America, or is an updated recognition of the people who were there before 1492.

Christopher Columbus did sail across the Atlantic multiple times, though he didn't even set foot on the North American continent (he landed in the Caribbean, and Central and South America). It's clear he wasn't discovering the land, as there were already people on the islands and shores where he did arrive, not to mention that Norse explorer Leif Erikson sailed to Canada hundreds of years earlier (today is also considered Leif Erikson Day).

In recent years, city governments around the country
click to enlarge 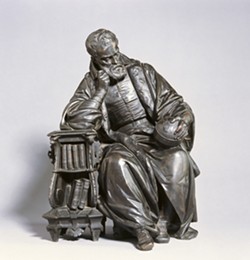 Wellcome Collection photo
and in Washington state have felt compelled to recognize that actually, there were people here well before that. Many of them have dropped Columbus Day for Indigenous Peoples' Day or Native American Day, honoring the people who were already there, and whose lives were often destroyed after increased contact with Europeans.

The pattern of dropping Columbus doesn't sit well with everyone: Italian Americans have spoken out against moves to drop the celebration, as the eventual federal holiday was initially started as a celebration of Italian-American culture and the 300th anniversary of Columbus' first sailing.

Here's a list of PNW cities that have made the switch:

Moscow: Just last week, the Moscow City Council voted to be the first city in Idaho to celebrate Indigenous Peoples' Day in lieu of Columbus Day.

Spokane: The city celebrated its first Indigenous Peoples' Day in 2016.

Seattle: In 2014, the Emerald City's council made the second Monday in October Indigenous Peoples' Day.

Bellingham: In 2014, Bellingham's City Council voted to celebrate Coast Salish Day, honoring regional indigenous people and tribes, and had the first celebration in 2015.

Portland recognized the day in 2015, with Eugene, Oregon, following suit in early 2016.