Two words come to mind — bizarro and whimsical — when you encounter “Meet the Joneses,” a photo project by New York-based writer and visual artist Jonathan Hollingsworth, who’s brought to life the Jones clan, a circa 1950s family of plastic figurines making its way in the world.


Hollingsworth, who eventually plans to recount the family’s journey in a book, added to the project during a recent visit to the Pacific Northwest; find more of those images below. You can also follow the Joneses on Facebook and Instagram.

Hollingsworth's previous work includes the photo book Left Behind: Life and Death on the U.S. Border, which documented the items and artifacts left behind by immigrants who died during the perilous journey to America.

Hollingsworth offers some backstory to his "Meet the Joneses" project to the Inlander:


There is no such thing as an innocent stroll through a flea market. This is what I realized as I walked home through my Brooklyn neighborhood, carrying a perfectly preserved 1950s tin dollhouse, as slack-jawed children and families stepped out of my way.

I can't pretend that I didn't know what I was up to. As a photographer, sometimes ideas pop into your head, fully formed. Sometimes you can just ignore them, but other times they don't let go.

That's how the project 'Meet the Joneses' started. With the perfect house, comes a not-so-perfect family: the plastic figures, Mr. and Mrs. Jones, and their children — Gregory, the oldest son, and the twins, Carol and Cheryl — were cobbled together from a range of sources.

At the beginning of 2016, I started posted pictures of the family at home, on Instagram and Facebook. They were a little dark, a little tongue-in-cheek. Happiness isn't a state of being. Not even for the Joneses. Then, slowly, I started introducing other visual elements from the 1950s: book covers, excerpts from novels, other famous Joneses and vintage Kodachrome slides of Americans at home.

And when I had to travel, the Joneses came with me. (It's one thing to take pictures of little plastic people in the privacy of your apartment. It's quite another to take them out in public.) The pleasure of the freak factor still hasn't worn off, I have to admit.

Initially the goal was to shoot the series for one year, but almost two years in, the Joneses still have so many places to go — and hopefully this won't be their last visit exploring the beauty of the Inland Northwest. 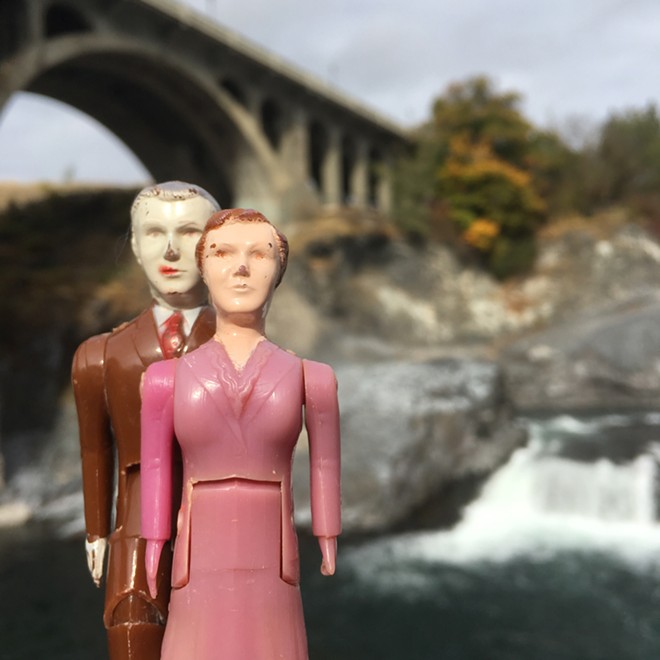 Jonathan Hollingsworth
Below the Monroe Street Bridge, in Huntington Park
click to enlarge

“Meet the Joneses” in the Inland Northwest 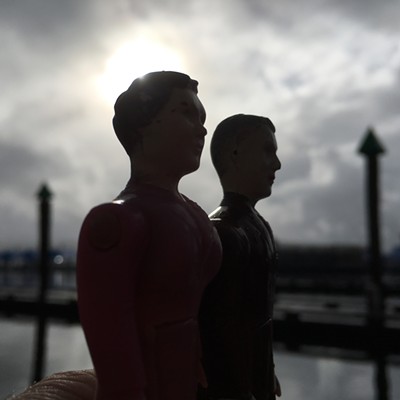 Speaking of For Fun! , Arts & Culture