There's this scary thing about reality TV: even those of us who make jabs at how dumb and manufactured it is can find ourselves sitting there hours later, hanging on every word of the cheap drama.

Sure, it starts out ironically. We don't really like The Bachelor, or the Real Housewives. We're just watching to make fun.

Until we're not. It's a guilty pleasure, and we're hooked.

That's kind of what happened when writers at a certain weekly newspaper started watching The Fratchelor, the Washington State University student-produced version of the popular dating show with a college spin. It features a dozen single sorority girls hoping to make a connection with eligible frat guy Jake, who's looking for a serious girlfriend.

Initially, it makes for an easy low-blow target, riddled with weird editing, annoyingly repetitive introductions (LITERALLY ARE WE EVER GOING TO SEE INSIDE THE FRAT HOUSE AFTER ONE OF THESE LADIES MEET HIM???), and cringeworthy joking labels like this one (you guys... just... no. Just... no.)

You see, at first, we're better than the show.

A "One Way" sign points to the top of the screen for an awkward amount of time.

A dude points at his wenis while standing on a porch. Zoom out from a frat house.
Zoom out from a building.
Zoom out from a single red solo cup sitting on a plywood table. A 2-liter bottle of ginger ale and can of Rolling Rock stand behind it, vying for attention, while a devastated Coors Light leans on Blue Moon for support in a lawn chair in the distance.
Foreshadowing. Visual poetry.

But soon, it's proving to be a powerful distraction. Where did the last two hours go?

And we're not alone in this: the first episode, posted in September, has more than 18,000 views on the Cable 8 Productions YouTube channel.

Like all great love stories, there's hope, butterflies, and adorable, cheesy moments like this (you only need to watch until the 9:17 mark):


And there's anguish, jealousy (who made out with him when the other girls weren't around???) and impressively ready-for-TV teasers that somehow hook you in every. single. time.

(Same freeze-frame, but it's a different clip, watch it!)


As you'd expect with all student projects, there are hits, like taking the contestants to classic Pullman date spots like Cougar Country and Zeppoz (only slightly nostalgia-inducing for this writer, who grew up there...).

And there are misses, like having viewers sit through four full minutes of recaps, dramatic music, cutting from face to face, fade to black, fade up, fade to black again, fade up again, aaaaaaaaaaaaaaaand now you can find out who gets the last rose. (Here's looking at you, Episode 3).

We've only made it to Episode 3, and Episode 4 just dropped earlier this week, but if you too want to get sucked into the abyss, you can catch the whole season at the Cable 8 Productions YouTube channel.

CONCERT REVIEW: The Jesus and Mary Chain stick with a winning sound 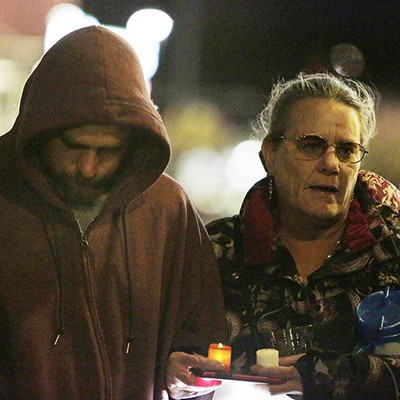