Spokane has undergone a great deal of change over the past quarter-century. Robert Herold has weighed in on most of it, registering his take on history and helping to make it happen.

A member of the Inlander family since 1994, Herold has
click to enlarge 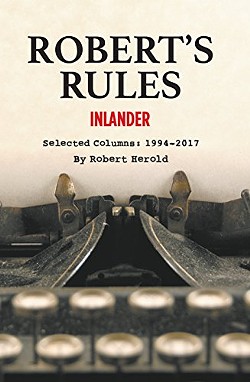 been an editorial pillar of the newspaper, a voice of conscience — and prescience — for a then-fledgling weekly finding its wings. His mission mirrors that of the Inlander: to help make Spokane a better place to live. And if there's anything that comes through in his writing, it's how passionate he is about Spokane, how much he cares about this city and region.

The Inlander has published a compilation of some of Herold’s most memorable columns — words that resonate and stand the test of time, that speak to our future, not just our present and past — as the newspaper approaches its own quarter-century of reflecting life in Spokane and the Inland Northwest.

Robert’s Rules: Selected Columns: 1994-2007 is an reintroduction to Spokane’s not-so-distant past, to the rise of the strong-mayor system and the fall of Jim West, the rebuilt Riverfront Park and the [thankfully] never-built Lincoln Street Bridge.

Herold, a Gonzaga political science professor for the past 17 years following 31 years as a professor and administrator at Eastern Washington University, reads from Robert's Rules Wednesday, Nov. 29, at Auntie's.

The book’s 87 entries are divided roughly into thirds, with 9/11 as the first line of demarcation and the Great Recession as the second; the book’s latter two-thirds moves beyond Spokane and the Inland Northwest to address national and international politics.

“I hope a kind of panoramic view of recent Spokane political history emerges from a reading of these columns,” Herold says. “Spokane, to some extent in the last 20 years, has benefited from a string of positive unintended consequences.”