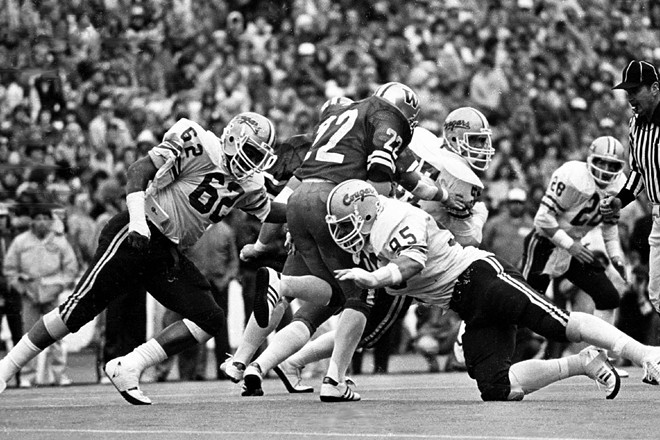 WSU Athletics
Three Washington State defenders surround Washington running back Sterling Hinds as Cougars safety Paul Sorensen (28) closes in on the play during the 1981 Apple Cup at Husky Stadium, won 23-10 by the UW.
When Paul Sorensen hit an opponent on the football field, he delivered a powerful blow. 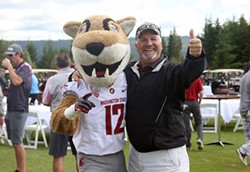 Greg Davis Sports Photography
Does it get any more Wazzu (in a good way) than Butch the Cougar and Paul Sorensen?
a Northern California junior college, he made an outsized impact as an All-America free safety who packed a wallop. A team leader and senior co-captain, Sorensen was far from one-dimensional; twice an All-Pac-10 All-Academic pick, he also intercepted four passes for a 1981 team that represented Washington State in a bowl game or the first time in a half-century, and only the third time ever.

Selected by the Cincinnati in the fifth round of the 1982 NFL draft (one of 10 players from that 1981 Cougars team to be drafted from 1982-86), he spent a season with the Bengals, another with the 49ers, and played in the USFL. You might know him better as the color commentator and analyst on Eastern Washington football radio broadcasts for the past 14 years, and as a color commentator on WSU radio broadcasts from 1985-98; during that 14-season span, he called some of the most memorable games in Cougars history.

In September, Sorensen was inducted into the WSU Athletics Hall of Fame. He answered questions regarding his Apple Cup experiences ahead of Saturday's game in Seattle:


Q: This is the biggest Apple Cup of the Pac-12 era; arguably the biggest for Cougars fans in 15 years, since the 2002 game. What would a victory, with the prospect of a rematch with USC in the Pac-12 title game, mean to this football program?


Q. You've experienced something very few have: You've played in two Apple Cups. What was it like? What sets it apart from other rivalry games? What emotions will players be feeling when they take the field Saturday at Husky Stadium?

A: The experience was awesome, because as a team we would have done something not done in 50 years at WSU, which is win the Pac-10 Conference championship, then go to the Rose Bowl. We lost the game to the Dawgs, but we still went bowling — the Holiday Bowl vs. BYU in San Diego. That bowl appearance broke a 50-year drought, and since 1981 the Cougs have made 11 additional bowl appearances, including the yet-to-be-determined 2017 game.

The feeling will be at fever pitch, as you want to beat your rival. Add to the passion that UW has won seven of the last eight Apple Cups and three straight games in the series. As a player, keeping the emotions under control will be a big deal. You focus on the game and block out all the outside noise. Because that's what it is, just noise!


Q: What was memorable about the team experience for the 1981 Apple Cup, and what is it like to play at Husky Stadium, as opposed to other conference venues?

A: I loved playing in that game: it was vicious, hard-hitting, very intense and exceptionally loud. I didn't like the overall experience because we lost the game to the Dawgs, along with the conference championship and the opportunity to represent Cougar Nation in Pasadena in the Rose Bowl.

I wouldn't trade one second of my experience at WSU, with the opportunity to play for Jim Walden, along with all our assistant coaches and my great teammates who I love, sharing our experience to this day!

As offensive lineman Dan Lynch, an All-American and Morris Trophy winner, once said, "There are four important stages in your life: You are born, you play the Huskies, you get married, and you die!" Go Cougs.


Also, Paul Sorensen on WSU's defense: "The Cougs are great at taking away the top two or three favorite plays a team likes to run, so you have to beat them doing something outside your comfort zone."