For some reason, it seems like bananas are always associated with muffins, not cupcakes.

And to be fair, the recipe for this edition of Bitchin' Bites on a Budget won't call for frosting. But it's a cupcake, as it calls for plenty of butter, sugar, and most importantly, bacon.

And not just any old bacon. Candied. Bacon.

Please, hold your applause 'til the end of the show, folks.

Continuing on our path of making bitchin' food without breaking the bank, I give you:

In the spirit of getting the biggest bang for our hard-earned bucks, I briefly want to share with you something cool I only recently learned.

For most banana recipes, you need the fruit to have already softened a bit. The riper, the better, right? But most of the time, you can't buy them that way at the store.

I picked out a 3-pound bag (about 7 bananas) that was particularly covered in spots, fully expecting to pay the already good price of $1.99.
click to enlarge

But when I got to the cash register, the cashier picked them up, looked them over, and said, "These are looking really ripe, so I'll give them to you for 50 percent off."

That's 99 cents! For soooo much banana.

In fact, it was way more than I needed, even after doubling a recipe so I could bring these into work, but the great thing about ripe bananas is you can peel them, throw them together in a ziplock bag, and freeze them until you're ready to make banana bread.

Alright, onto the good stuff.

BANANA CUPCAKES W/ CANDIED BACON, AKA "HOW TO SOUND FANCY IN A HURRY"

For the cupcakes, I started with Food Network's "Gina's Banana Cupcakes."

I ignored the frosting recipe, doubled the proportions that you'll find at the link above, and used a mini muffin tin instead of a normal one, so I'll write it out the way I made this batch. (This will make about 50 to 60 mini muffins.)

Candied Bacon
About 3/4 pound of bacon, baked until crispy and cut into bits
1/2 stick of butter
about 1/3 cup of dark brown sugar

• Combine the flour, baking powder, baking soda and salt in a bowl and leave it for later.

• Use a stand mixer, or large bowl and a hand mixer, to cream together the butter and sugar, then add the sour cream and vanilla extract. Add the eggs one at a time, then slowly add the dry ingredients until combined.

• Add in the bananas (and if you want, walnuts) and mix until it's just combined.

For the candied bacon:

• Put 4 tbsp (half a stick) of butter in a sauce pan on medium low, and just after the butter is melted and starting to bubble, add in the brown sugar.

• Turn up the heat to medium, and stir the mixture regularly with a heat-proof spatula or wooden spoon, until it starts to bubble up and change color.

This is a great photo of post-pour, pre-stir, and a great example of why you should just stir first, and not take photos in the middle of this process (the sugar and butter start to harden almost immediately).

• After the candied bacon bits cool enough to sort through them, load up your well-greased mini muffin pan, and then put a piece or two on top of each cupcake.

• Bake at 350 for about 8 to 10 minutes (you'll smell when they're about ready), until golden and a toothpick comes out clean.

ENTRÉE: A new spot in town for your mac-and-cheese fix, plus other news 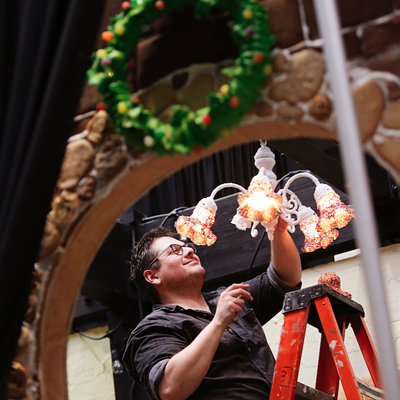