Samantha Wohlfeil
Josiah Torba and Cailin Carpenter walk through downtown Spokane, Friday morning, Jan. 26, 2018, as they look for homeless people to survey for the city's annual "point-in-time" count. They tried not to wake people up who were sleeping under freeway overpasses, such as this one. The two regularly do similar veteran outreach work in their jobs working for the Supportive Services for Veteran Families program with Goodwill Industries of the Inland Northwest.
To get some idea of where people experiencing homelessness slept last night in Spokane and nearby communities, volunteer workers are heading out into the community for about a week, as they try to survey as many people as possible both in shelters and living outside.

The annual "point-in-time" count is required to be collected once a year for federal funding purposes, and is meant to give a rough idea of the size and scope of homelessness in the area. However, the agencies who participate help collect much more information than required by the federal count, expanding outside of shelters to try and talk to people sleeping outside, in cars, and on couches.

Just before 9:30 a.m. Friday, Jan. 26, Cailin Carpenter and Josiah Torba leave the Third Avenue administrative offices for Goodwill Industries of the Inland Northwest, lugging backpacks and bags filled with snacks, socks, deodorant, foot powder, hand warmers, and other items that people they encounter on the streets of downtown might need.

They're just one team of about 100 or so volunteers who are interviewing people for this year's count, using a digital app to collect information for the first time, rather than paper surveys that volunteers have had to fill out by hand in the past.

The two, who normally do outreach work like this through their daily work with Goodwill's Supportive Services for Veteran Families program, start their morning by walking under Interstate 90.

"They've cleared this area out," Torba says as he, Carpenter, and Spokane Homeless Services Program Manager Tija Danzig walk past a row of parked U-Haul trailers under the freeway. "Since adding the rocks, it's been a little lighter."

The city of Spokane added $150,000 of boulders near I-90 and Bernard Street in September, in part to discourage camping in the area.

"This area was an issue in the summer," Carpenter says.

As they make their way west, the team sees multiple people tucked into sleeping bags and blankets in the 34-degree weather, which feels more like 23 with the wind. There are at least half a dozen people sleeping underneath concrete overhangs and on steps, and the team doesn't wake them up to ask them to do the survey.

The hope is those folks will either be awake later and get tallied by this or another team, or they'll be captured when they visit a meal site or shelter where workers will be checking with guests over the next few days to make sure they've taken the survey, Carpenter says.

"Sometimes they feel safest if they stay up all night and sleep all day," Carpenter says. "We obviously want to count everybody, but that's not always realistic."

When they do find someone who is awake, they offer dry socks and food, and ask if the person will take the survey, which collects age and health information, but remains anonymous.

Questions are designed to get a sense of issues that may impact someone's ability to find or keep stable housing: Do they have mental health issues? Do they use drugs or alcohol? Do they have any income? When were they last housed and where?

Carpenter strikes up a conversation with a man standing in the smoking area of the STA plaza, and soon another man nearby agrees to answer her questions. The team moves inside the plaza, but it's hard to tell who would be good to survey. There are likely many people hanging around who didn't sleep in stable housing last night, but you don't want to presume anything, Carpenter says, and the team moves toward River Park Square.

Only a few steps in the door, a young couple carrying a few bags of belongings asks if the team knows where City Gate is. Carpenter asks if they need anything, and after Torba hands them socks and toiletries, he calls to find out if City Gate is serving lunch, while Carpenter starts the survey.

The man, John Looper, says they've been sleeping in a stairwell downtown, and don't stay in shelters because they don't want to be separated. They get woken up by a dog and property manager kicking them out most mornings, Amber Shaw tells the Inlander after they've finished the survey.

Both have kids from previous relationships, who are now staying with other relatives, Shaw says. Her daughter is 11, and his kids are 10, 8, and 6.

They've both struggled with substance use, but had gotten on suboxone treatment and found stable housing last year. But after his mom passed away and an eviction put them back on the streets last fall, they went back to using, and it's what's keeping them from finding housing again, Shaw says.

"We use heroin and meth, but heroin is the big one for us," Shaw says.

"We never used to touch the stuff ever," Looper says. "Being out on the streets and cold, and just my mom's death and everything just really ... it's the only thing that I can find to deal with the pain."

He wishes it was easier to get a quick job. They both hate living like this. 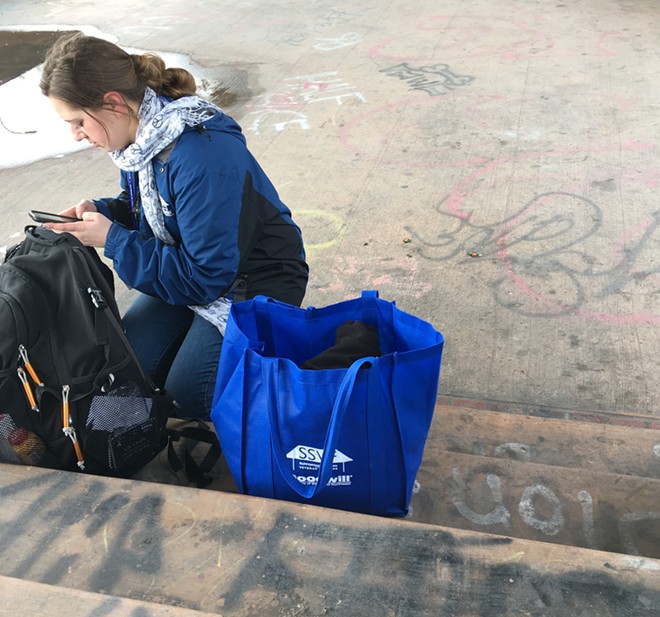 Samantha Wohlfeil photo
Cailin Carpenter, outreach lead for the SSVF program for Goodwill Industries of the Inland Northwest, helps survey people experiencing homelessness for the city's annual "point-in-time count," which aims to get a snapshot of where people are sleeping in the city, and what is affecting their lives and ability to find housing.
Carpenter and Torba loop back toward the freeway, stopping to interview a man "flying the sign" at a busy intersection, then survey another man eating lunch under the freeway before heading back to their office for a break. After a quick bite to eat, they plan to gather more supplies and head out in a car for the afternoon to find people in Browne's Addition and Peaceful Valley.

For the rest of the day, teams throughout the city will keep counting at food banks, meal sites, and other popular places, and the work will continue both in the city and in outlying communities over the next few days as workers try to reach as many people as possible.

Though the city won't share its compiled data until later, the early returns are already interesting, Danzig says. Having the data readily available  — she can pull up a live map on her phone to check on any survey happening at any time — will be helpful as the city plans how to best combat homelessness and underlying issues.

"It's never good to hear there are more numbers," she says, "but it allows us to have that conversation."

Riverfront Park IMAX will be torn down starting Monday