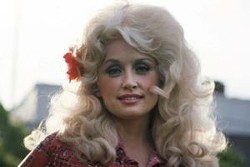 Perhaps someone will do Dolly for The Bartlett's country covers night on Tuesday.

When you're hankerin' for some fun, take a virtual stroll through our event listings and Staff Picks, there's plenty of goodies in there. Here are some highlights of the week ahead:

WORDS | Head over to the Jundt Art Museum for what should be a pretty enthralling discussion. University of Texas professor Brent Sasley will lead a public talk, titled "Jewish, Israeli, or Middle Eastern? Dilemmas of Israeli Identity."

MUSIC | The Bartlett is kicking off a new series of themed open mics, and I love the idea of local musicians stretching into some potentially new places. Tonight, it's an evening of country covers hosted by The Holy Broke, and it's free! On Wednesday, catch Scott Ryan leading covers of soundtrack tunes, and on Thursday, Karli Ingersoll will lead a batch of covers of tunes written by women.

WORDS | Sally Lodato rode her bike around the world, literally, 30 years ago, and wrote a book about the experience. She recently rewrote Seeing Myself Seeing the World, and she'll read and discuss it at Auntie's on Wednesday. You can read a story we did about Lodato's adventure right here.

MUSIC | Portland dreampoppers Tender Age was one of our featured Volume music fest bands last summer, and they're back to kill it at Baby Bar, joined by Wild Body and Stares. Here's a taste:

COMMUNITY | Hit up Spark Central for a workshop with local author Bruce Holbert, built around helping you "build characters with dimension" in your own writing.

BEER | Perry Street Brewing is celebrating its fourth birthday, so put on your party hat and enjoy some delicious beverages Friday and Saturday.

THEATER | Go Down the Rabbit Hole for a Steampunk Cabaret performance happening Friday and Saturday at the Omega Event Center.

FESTIVAL | The Inland Northwest Motorcycle Show & Sale is going down all weekend, so if you're into rolling on two wheels, you probably want to hit that.

COMMUNITY | It's International Women's Day all over the world, including in Spokane, where you can celebrate at the Women's Club Saturday afternoon.

MUSIC | It's a Rockin' Road to Dublin at The Fox tonight, blending Irish dance with Celtic rock for a show sure to get you in the spirit of St. Patrick's Day a little early.